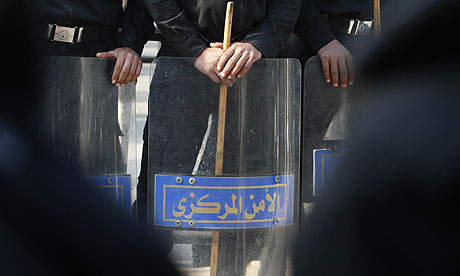 Minister of Interior Mohamed Ibrahim said the police are the only body tasked with maintaining security in Egypt and that the officers need the people’s support.

The minister statements were made in Riyadh during the 30th Conference for Arab Ministers of Interior.

He added that he rejects popular committees’ efforts to secure the country instead of the police, state-run news agency MENA reported.

Ibrahim’s statements come after “popular committees” made up of Al-Jamaa Al-Islamiya members roamed the Upper Egypt governorate of Assiut, promising to bring residents security during what has been described as a “security vacuum”.

After increasing demands to have the army manage the affairs of the nation especially in Port Said, the minister said on Sunday that the army is incapable of doing the police’s job.

Policemen have been on strike for nearly ten days in several parts of the country including Assiut. Police stations have been closed as a result of the strike, and officers in Port Said have completely withdrawn from the streets. The army is currently enforcing security in the canal city.

The strikers are demanding better armament to face increasing protests, the removal of the interior minister and the independence of police from political affairs.

Ibrahim held meetings with top police officials and Central Security Forces recruits earlier this week and said he is confident the police will continue to carry out their responsibilities of securing the people and public and private property.

As part of the conference, Ibrahim met with the Saudi Minister of Interior Mohamed bin Naif Abdulaziz after arriving in Riyadh on Tuesday.

The Egyptian interior minister gave a speech in the opening ceremony where he said the Conference for Arab Ministers of Interior “has become one of the most important mechanisms to support security… under the rule of law and respect for human rights”.

Representatives from 22 Arab countries as well as Arab League, Gulf Cooperation Council and United Nations representatives attended the conference in which fighting drug abuse and ways to support Palestinian security were discussed.