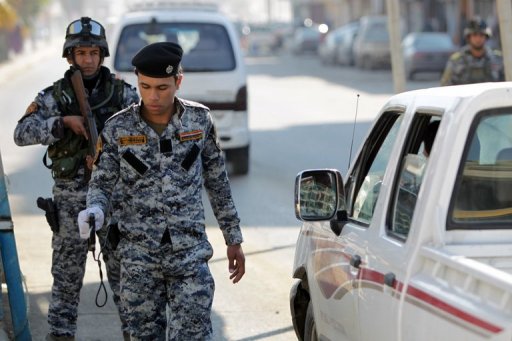 AFP – Coordinated attacks involving a string of bombings and a brazen attempted assault on a ministry near the heavily-fortified Green Zone in central Baghdad killed nine people Thursday, officials said.

The violence comes just days before the 10th anniversary of the US-led invasion of the country, and with barely a month to go before Iraq holds its first elections in three years.

No group immediately claimed responsibility for the attack, but militants including those linked to Al-Qaeda often target government officials and offices in a bid to destabilise Iraq.

At least three bombs were detonated in the Allawi neighbourhood, near the foreign and culture ministries and offices of the communications ministry, at around 1:30 pm (1030 GMT) while militants staged an apparently unsuccessful assault on the nearby justice ministry, officials and witnesses said.

“The bombs … were coordinated with them (militants) trying to get into the ministry.”

Justice ministry spokesman Haidar al-Saadi said no ministry employees were hurt in the attempted assault, and that there had been clashes in front of the ministry building.

Iraqiya state television reported that security forces evacuated all employees from the ministry.

At least nine people were killed and 25 wounded in the attacks, an interior ministry official and a medical source said.

Gunfire was heard in the aftermath of the blasts, and plumes of smoke could be seen rising above the neighbourhood, witnesses said.

Also on Thursday, a bombing targeted a candidate in Iraq’s upcoming provincial elections, while another was kidnapped along with his father and other relatives north of Baghdad.

A magnetic “sticky bomb” exploded on a car carrying Khaled Hussein al-Daraji, a candidate in Salaheddin province, killing his driver and wounding three nearby workers, though Daraji escaped unharmed.

And a tribal sheikh, Qais Abdul Karim al-Janabi, was kidnapped along with his son, Salaheddin provincial elections candidate Abdul Karim, and five other relatives in Siniyah, north of Baghdad.

Provincial polls are to be held on April 20, Iraq’s first vote since March 2010 parliamentary elections.

Violence has decreased from its peak in 2006 and 2007 when sectarian bloodshed raged.

But 10 years after the US-led invasion, attacks remain common, killing 220 people last month, according to an AFP tally based on security and medical sources.