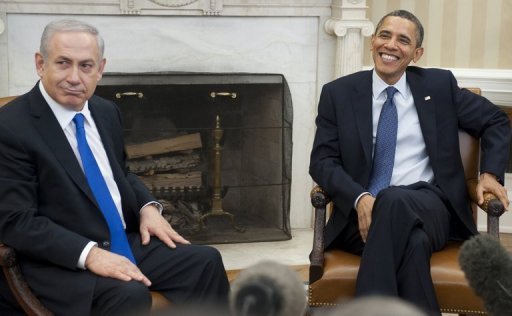 AFP — US President Barack Obama says his forthcoming trip to Israel and the Palestinian territories is to “listen” to both sides and hear their views on how to move forward after over two years without peace talks.

His remarks on Thursday came in an exclusive interview with Israel’s Channel 2 television broadcast a week before the US leader starts his first visit to Jerusalem and the West Bank town of Ramallah since being elected president in 2008.

During the visit, starting March 20, Obama will meet with Israeli Prime Minister Benjamin Netanyahu in Jerusalem and Palestinian president Mahmud Abbas and his premier Salam Fayyad in Ramallah to hear their perspective on how to resolve the decades-long conflict.

With Israel in the throes of establishing a new coalition government, which is due to be sworn in just days before he flies in, it was “unlikely” there would be any breakthrough, Obama acknowledged.

But he would press both sides “to recognise the legitimate interests” of the other.

“To Abu Mazen, I will say that trying to unilaterally go to, for example, the United Nations, and do an end run around Israel, is not going to be successful,” he said, referring to Palestinian attempts to secure UN recognition as a state that have angered Israel.

“For example, making sure that issues like settlements are viewed through the lens of: Is this making it harder or easier for Palestinian moderates to sit down at the table,” he said.

The Palestinians have said they will only return to peace talks if Israel halts its settlement activity and recognises 1967 lines as the basis for negotiations.

But Israel is insisting it will only return to the negotiations if there are no pre-conditions.

“I think we’re past the point where we should be even talking about pre-conditions and steps and sequences. Everybody knows what’s going to be involved here in setting up two states, side by side, living in peace and security,” he said.

“How we get into those conversations, whether they can happen soon or whether there needs to be some further work done on the ground, that’s part of what I’ll explore when I’ll get there,” he said.

In Washington, senior Obama aides said that the president wanted to speak directly to young Israelis, so had chosen to deliver a speech at a Jerusalem conference center and not to the Israeli legislature, the Knesset.

They billed the speech as a complement to an address he delivered to the Muslim world in Cairo in 2009.

“We thought it was very important for him to speak directly to Israelis,” said Ben Rhodes, a deputy national security advisor.

While it may lack diplomatic ‘deliverables,’ Obama’s visit will not be short in symbolism.

As soon as he arrives at Tel Aviv airport on Wednesday, Obama will inspect a battery in the Iron Dome air defense system that was largely funded by the United States and credited with saving lives in Israel’s showdown with Hamas last year.

On Thursday, he will inspect the Dead Sea Scrolls, biblical texts seen as a testament to an ancient Jewish connection to Israel.

Before he leaves Israel on Friday, Obama will travel to Mount Herzl, where he will lay wreaths at the graves of assassinated Israeli prime minister Yitzhak Rabin and Theodor Herzl, the founder of modern Zionism.

Also on the trip, Obama will be feted at a state dinner by Israeli President Shimon Peres, visit the Yad Vashem Holocaust memorial and tour the Church of the Nativity in Bethlehem.

In Jordan on Friday, Obama will meet King Abdullah II and hold a press conference before visiting the ancient ruins of Petra a day later.