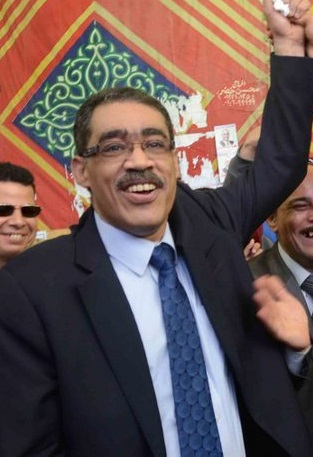 Rashwan beat four other candidates including Al-Ahram Managing Editor Abdel Mohsen Salama for the post. The other candidates were Sayed Al-Iskandarani and Noura Rashed of the state-owned Al-Gomhoreya newspaper, and Mohamed Maghraby Ahmed of Al-Shaab newspaper.

Press Syndicate elections are normally scheduled for October but internal divisions within the syndicate board and the body as a whole drove many to call for early internal elections. The elections were for the position of chairman and for six out of the 12 board seats.

Three of the six incumbent board members managed to re-secure another term on the board: Secretary General Karem Mahmoud, Osama Dawoud, and former Al-Gomhoreya chief editor Gamal Abdel Rehim were able to retain their positions on the board.

Al-Wali’s membership ofthe Muslim Brotherhood and his approval of the new constitution as the Constituent Assembly member representing the syndicate, despite the syndicate voting for his withdrawal,are among the main reasons for the division and as a result Al-Wali, who was attacked at the syndicate’s front door two weeks ago, announced he would not be running again.

The early elections were suspended by the Administrative Judiciary Court following a Muslim Brotherhood lawsuit, but the Supreme Administrative Court reversed the suspension upon appeal.

The elections took place on Friday from 3pm to 7pm after the syndicate general assembly reached quorum and held a meeting vowing to avenge slain photo journalist Al-Husseiny Abu Deif.

The Arab Network for Human Rights Information (ANHRI) released a statement on Saturday recommending that the new syndicate board and chairman work towards solving the many problems of Egyptian journalism, especially when it comes to state-owned publications.

“A large part of freedom of the press right now has to do with journalists challenging the current regime in order to ensure independence which in turn led the regime to clamp down on journalism and the media,” the statement said.

ANHRI called on the syndicate to push for legislative reforms and constitutional amendments in order to cancel imprisonment of journalists from the penal code and allow for more press freedom.