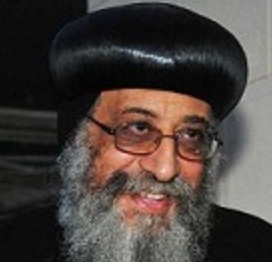 “He assured us that the church considers this matter of the utmost importance and that it was fully cooperating with the foreign ministry and all government officials involved to try and get all the detainees released,” Magdy said.

The meeting came after dozens of Coptic youth held a protest in front of the Libyan embassy in Cairo demanding the release of all Egyptian Christians still detained in Libya.

“The pope did not tell us explicitly how to deal with the matter but he advised us to approach it with great care, wisdom, and rationality,” added Magdy.

The detainees, who were arrested earlier this month, claim that Libyan authorities tortured them. Egyptian authorities secured the release of 20 of the detained Copts but 23 remain in Libya.

Nazih Al-Naggari, deputy spokesperson of the Egyptian Ministry of Foreign Affairs, later said that four Christian Egyptians remain in Libyan custody, while 55 others were released on Tuesday.

One man, Ezzat Hakim Attallah, died in a Libyan prison. Both the Libyan and Egyptian authorities claim he died naturally of diabetes and heart complications but his family said torture and neglect by Libyan authorities were to blame. Coptic activists marched to the Libyan embassy in response to Attallah’s death.

Unknown gunmen set a Coptic church in Benghazi ablaze on Friday. Libyan authorities said the attack was a response to Egyptian activists burning the Libyan flag at their protest.