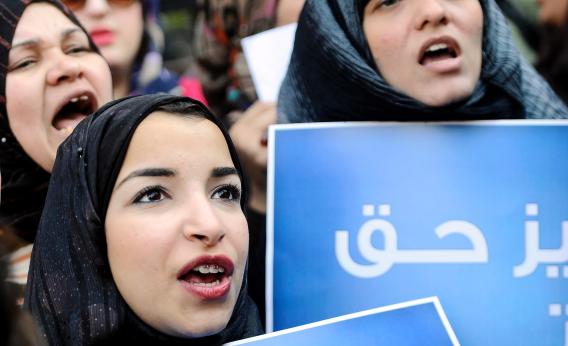 The United Nations Commission on the Status of Women completed its 57th session on Friday, the outcome of the meeting being a new declaration signed by more than 130 member states aimed at ending violence against women. Despite the overwhelming support shown by member states towards the declaration, several Arab nations expressed reservations on a number of issues dealing with women’s agency, female sexuality, abortion and women’s role in society.

At the time of writing, the UN had not released the full list of agreed-upon articles discussed in the meetings. The Canadian National Council for Women (NCW) published a partial list, which included the full participation of women in the formal economy, tackling gender discrimination and shattering gender norms.

The declaration, Tallawy said, is an honour for her and for Egyptian women who have made many sacrifices for the nation since 1919, particularly during the 2011 revolution.

According to an NCW press release, Tallawy said Egypt has agreed to the implementation of the declaration in accordance with the legislative laws of the country, taking into account the traditions of the nation. She said the declaration is currently making its way to the UN General Assembly, where it will become “a moral obligation of the state to implement in accordance with domestic laws”.

Although General Assembly resolutions are non-binding, they do exert pressure on non-compliant member states when there is a clear majority of supporters.

Groups such as the Muslim Brotherhood reject the declaration, saying it breaches Islamic Sharia. The group listed ten points which they say represent “the final step in the intellectual and cultural invasion of Muslim countries,” such as recognition of homosexuality and abortion.

According to NCW, the Brotherhood statement was written by Kamilia Helmy, President of the International Islamic Committee for Woman and Child (ICWC). NCW said the ICWC is a non-governmental organisation “that attacks UN conventions.”

“The claim that the proposed document contradicts Islamic Sharia and its principles, demolishes Islamic manners and ruins the family institution is completely false,” NCW said. “This claim is deceiving, misleading and constitutes misuse of religion in an attempt to destroy the image of the United Nations.”

President Mohamed Morsi for his part did not comment on the Brotherhood statement, choosing rather to release a statement reaffirming Egypt’s commitment to empowering women and ending violence directed at women by “adopting an integrated strategy to eliminate this negative phenomenon whose roots go back to the pre-revolution period.”

“The strategy comprises short-term, medium-term, and long-term steps, some of which have already begun, including the government’s drafting of a law for combating harassment to be discussed in the Shura Council,” the assistant to the president on foreign relations said.

“We are not the only people who criticised the document,” Arif said echoing a previous statement and adding that the title chosen by the conference, ‘to defend the rights of women,’ is deceptive. Arif called on Al-Azhar to denounce the document.

Muhamed Soudan, the FJP spokesperson in Alexandria, said the FJP “may take action” once the declaration passes through the UN General Assembly. “We are waiting for the final decision from the party’s board,” he added.

According to his spokesperson, the UN Secretary-General Ban Ki-Moon said on Friday that violence against women “is a heinous human rights violation, global menace, a public health threat and a moral outrage.” The spokesman added that Ki-Moon “hopes that all the partners who came together at this historic session and others around the world will now translate this agreement into concrete action to prevent and end violence against women and girls.”

Thousands of representatives from governments, civil society, inter-governmental organisations, UN partners and the private sector collaborated on the 17-page ‘Agreed Conclusions’ over the past two weeks, the UN reported.

The UN Entity for Gender Equality and the Empowerment of Women said in a statement it “condemns in the strongest terms the pervasive violence against women and girls, and calls for increased attention and accelerated action for prevention and response.”