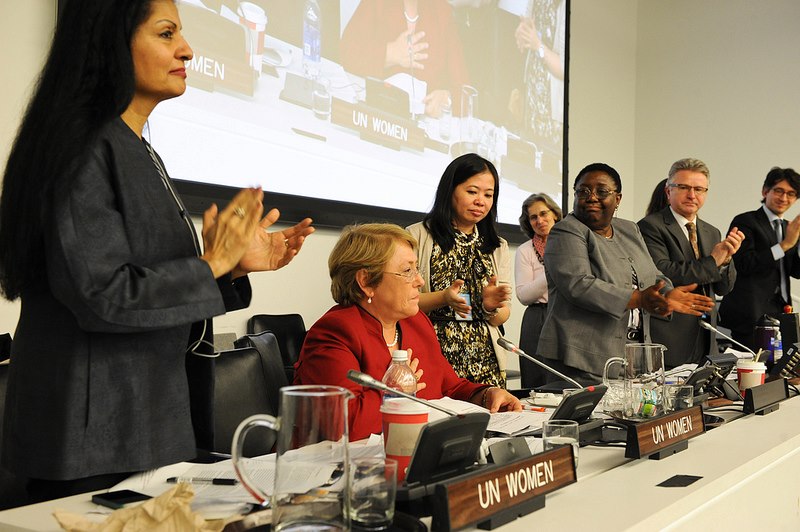 “The UN does not respect diversity and seeks to impose a monolithic set of western-style standards and values onto Islamic countries,” said Salafist group Al-Jamaa Al-Islamiya’s spokesperson Khaled Al-Sherif.

“We are against this declaration because it gives homosexuals equal rights, and homosexuality goes against the natural human disposition and divine laws.”

Al-Sherif is one of several outspoken groups and individuals praising and criticising the contents of the recently passed United Nations agreement on the rights of women.

Al-Sherif said his party has no official position regarding the agreement, “but I can assure you other members agree with what I am saying”.

“There are clear differences between women and men and their rights and responsibilities in society,” Al-Sherif continued. “This attempt at creating equality between women and men will therefore have a deleterious effect on society and family values.” He said that Islam is a religion of mercy, ensuring the rights of a woman according to her role in society. “In the West,” he added, “the woman has become a sexual commodity to be traded.”

“Giving equal rights to illegitimate children, and the right for women to choose their sexual partners freely, and their right to terminate unwanted out-of-wedlock pregnancies, will lead to the disintegration of the family in society and will encourage immorality,” Al-Sherif claimed. “This is why the West suffers from the breakdown in family values and high rates of suicide.”

Abul Fotouh said on Saturday via his official Twitter account that Al-Azhar “has never and will never accept any international document that runs contrary to the principle of Islamic Shari’a.”

Mustafa Omran, a founder of the Misr Al-Qawia Party, said he is not authorised to comment on the position taken by Abul Fotouh, nor could he clarify the party’s position at the moment.

Amr Moussa, a key NSF figure, defended the agreement saying that the future of Egypt’s women is “inseparable from those women in various communities in the East and West.” In his statement released on Sunday Moussa said Egyptian society must throw its weight behind the document.

He also said that Egypt is an advanced society with historical experience in liberating women and should therefore stop the claims and practices that perpetuate discrimination against women in the name of religion. He congratulated the NCW, saying he was impressed by their performance in leading the Egyptian delegation.

The women’s rights group had previously released a statement reprimanding the Brotherhood for criticising the agreement before the final draft was agreed upon. According to the Brotherhood and their political wing, the Freedom and Justice Party, the final draft is still unsatisfactory as it contradicts Islamic Shari’a and appropriate measures will be taken to oppose it.

President Mohamed Morsi had also released a statement on Saturday, avoiding his party’s strong-worded refusal. Instead, the president said he rejects all forms of violence towards women and has a comprehensive long- and short-term plan to combat the phenomenon and help empower women.

ElBaradei made brief mention on his Twitter account, saying the next challenge would be to translate the agreed upon words into action.

In reaction to the UN agreement, Al-Azhar said it is drafting its own document relating to women’s rights. Mohamed Mostafa Game’a, Al-Azhar’s media spokesperson, said the document will be unveiled once it is finished. He said Al-Azhar does not yet have an official position regarding the UN declaration because they have yet to read the document in its entirety.