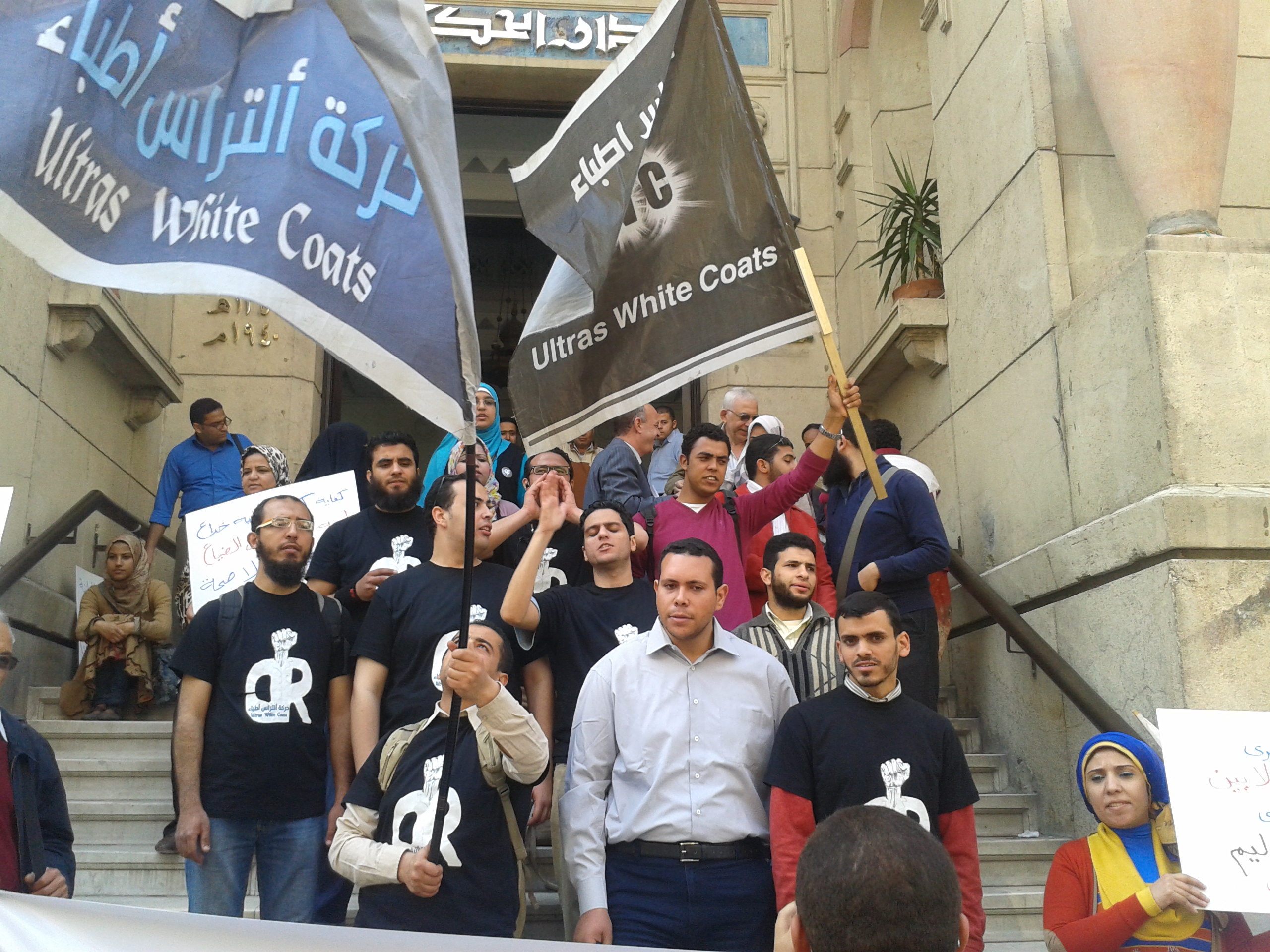 Sanaa Fouad, a council member of the Cairo Doctors’ Syndicate, said they have other demands but chose to push for the three most pressing ones. “If the government responds to our demands one day then maybe we can fight for other rights such as welfare,” Fouad said. “For now however we must fight for the most basic demands.”

Protesters gathered at the steps of the General Doctors’ Syndicate where they held banners, waved flags and chanted. The Ultras White Coats, a group founded last year and composed of doctors who are also football fans, carried most of the chants throughout the day.

“The government says a lot, but they do little,” the UWC chanted. “The Ministry of Health does not fear God.”

Mohammed Hassan Khalil, a member of the Committee for Defending People’s Right to Health, said the protesters’ demands existed long before the 2011 revolution broke out.

“There has been some dialogue between doctors and the Ministry of Health,” Hassan Khalil said. “These meetings, however, always end with the government discarding doctors’ input and doing what they want anyway.”

Hassan Khalil said he does not think the doctors’ strike will end soon, due in part to laws currently being discussed by the Shura Council which would privatise the country’s healthcare system. “The government is taking active steps to do this,” he said, blaming the decision on the World Bank’s pressure on the government.

“The World Bank solution for Egypt is privatisation,” Hassan Khalil said, adding that hospitals such as the Heliopolis hospital and Sheikh Zayed are some of the hospitals set to be privatised by the Sukuk Law.

“If we privatise the healthcare system,” Hassan Khalil said, “it implies we will change the nature of the healthcare institution to become a for-profit enterprise”.

Mahmoud Gawish, a doctor present at the protest, said these protests hoped to make it clear to the government that doctors need more protection in hospitals, better wages and a larger allocation of the government budget.

“The government changes, but there is no change,” Gawish said. “In many cases, there are not enough supplies or adequate facilities for doctors to work with, especially in rural areas,” he added. “Everyone has the right to be treated whether they are rich or poor; privatisation won’t help ordinary citizens.”

Gawish said as a doctor his first concern is to save patients’ lives. He says that the security vacuum created in the wake of the revolution has led to an increase in attacks on hospitals. “It has become a near-daily occurrence,” he said. “How am I supposed to save a patient’s life when someone has a knife on my throat?”

Gawish said the protesters demand an increase in the budget allocated to healthcare from the current 4.8% to 15%. “We need the bigger budget to be able to cover all the expenses,” he said.

Ahmed Marzok, the UWC spokesperson, said the next protest will take place on 29 March, when the doctor’s union medical board holds a general assembly to discuss four separate proposals put forth by Ahram, the government, Al-Watan, and the syndicate itself. These proposals are said to be very different, and UWC has not yet adopted an official position on the matter.

Doctors marched towards the Shura Council to continue the protest there.