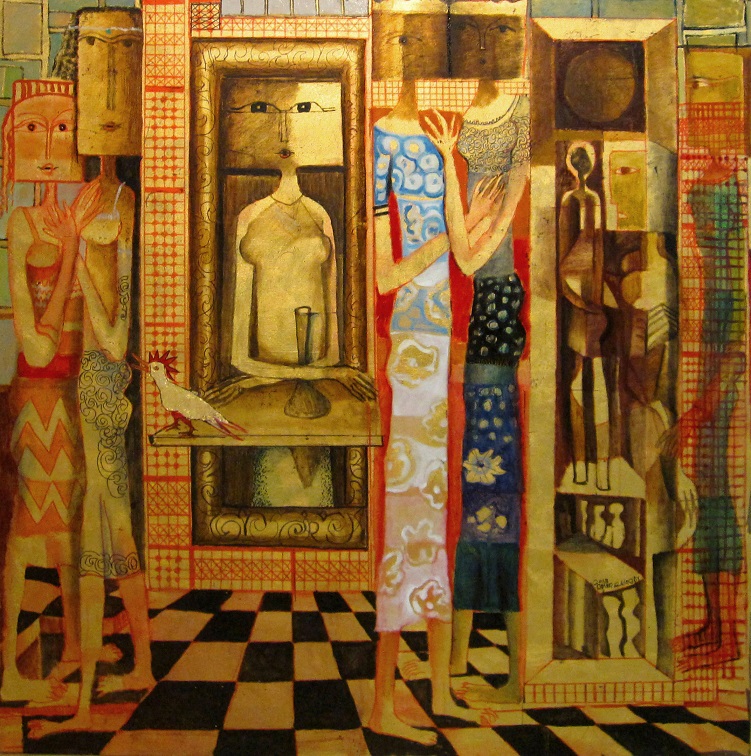 El Nagdi explained his artistic character: “My journey with visual arts started in my childhood, and in 1950 I started to participate in exhibitions. I became a member of the Liberal Artists group, which was headed by its honorary president and dean of Arab Literature [Taha Hussein]. My artistic character developed between the Bab Al She’reya neighbourhood and rural Egypt. The influences of the popular area’s noise and the quietness of the rural environment were complete opposites. This affected my artistic personality by making me unable to commit to a certain artistic style.”

He added: “My artistic journey was enriched by witnessing the unity of subject, accompanied by different branches of method. I learnt the techniques of Fine Art, Applied Art and artists’ supplements, which allowed me to be artistically unique. That is why I was awarded 16 local and international prizes, and obtained the French Parliament’s medal. There is a museum in my name in France, which organises exhibitions all over the country. In the sixties, my work was exhibited with 26 other international artists such as Pablo Picasso, Dali, Claude Monet and other master artists of the 19th century.  I formed the first Egyptian mosaics group in 1964, and afterwards, I formed the Phoenix group. [The Phoenix] is that mythical Arabic bird which does not exist, but soars in every existence…that is visual art.”

About the current exhibition he said: “My inspiration for this collection was the East, history, culture and civilisation. I wanted to do an exhibition that includes all the techniques I use in oil painting, etching, sculpture (negative space equation) and mosaic. In oil painting I use [the technique of] the continuous line, from the beginning of the painting till the end. In addition, I use watercolours and the negative space technique in sculpture, which affected many people. My certificate of creation for this technique is with critic Hussein Ameen Bikar.”

One of the techniques that caught our eye in some of his paintings was how he created a sculpture effect. He says this technique is called “the fifth dimension theory, which handles the process of transforming this philosophical dimension into a mathematical one, which can be measured”.

“I use sculpture painting in some of my oil paintings, [with it] I am teasing the viewer. You can do whatever you want as long as you do not alienate the viewer. The last painting, the Golden Bird or Chess, is a check-mate game, in which the black and white kings are gray, and the golden bird is a paradise Curlew, crooning via the melodies of the flute. Its singing is a form of worship or prayer for the people in the artwork,” El Nagdi said.

El Nagdi describes his current working method as “Zero Existence”. He explains this means “the moment the artist catches his breath when a sudden event is born”. El Nagdi continues: “At that moment, inspirational subconscious laws rise from the depths in the unconscious state of the self.

This allows the unconscious to bestow [inspiration] which then multiplies in light, darkness and colours while the artist is still in a state of unconsciousness. So he finds himself inside unfamiliar formulas in a flash, shorter than lightening, in one blinding moment; one that is filled with inspirational fountains, which include the irrefutable absolute. This settles in the artist’s arsenal, which he can summon whenever he wants.

At the same moment, the artist exchanges a hidden conversation with the sudden event. This is the inspiration that is proclaimed in a phenomenon, and which is hidden in its core. Hence, the subconscious meets the conscious so the creative phenomenon shines in a beautiful work of art.”