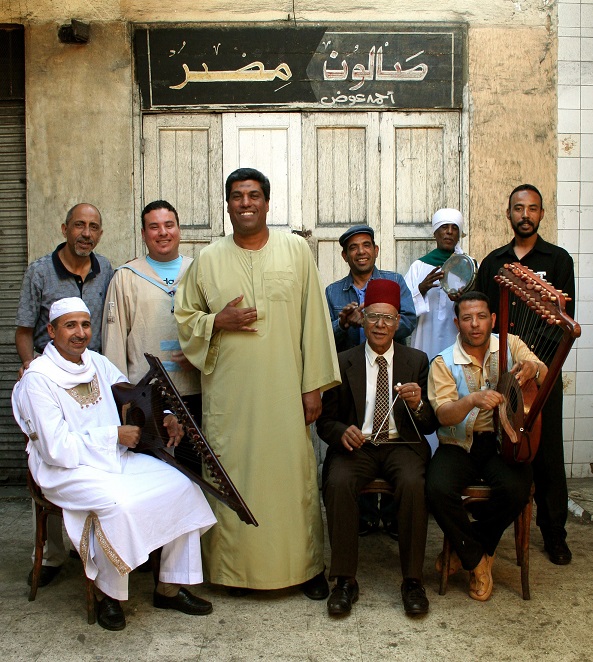 Port Said has crowded headlines recently because of ongoing political instability. The numerous marches– sometimes turning into violent confrontations between opposing sides– that take place in the city have turned it into a news hotspot, earning it names like “the city of revolution”, “the city of liberty”, “the city that vanquished colonisers”, et cetera. However, little is mentioned about the city’s long history with the arts.

El Semsemya is a form of dancing and music that became famous in Port Said during the time of the British colonisation, and afterwards, during the Tripartite Aggression. It grew in popularity as the citizens looked for something to unite behind and be inspired by, which would fuel nationalistic feelings and strengthen them in their fight against the oppressor.

Tackling this issue in her film, Seven Nights and a Morning, Arab Lotfy shows a different side of Port Said. Besides the enthusiastic fighting and the desire to sacrifice oneself for a national cause, Lotfy shows the fun and musical facet of the canal city. The film is aptly named for the week-long war which changed Port Said forever.

“I wanted the film to be from the point of view of the people of Port Said, therefore, I did not add any of my own comments. The whole film is about the memory of the people,” Lotfy explained. “Even the photos that were used in the movie were by people from the heart of the city. I did not use advertorial photos. [The photographer] Muscatelli, of Italian origin, was born and raised in Port Said and I did a clip on him to salute him.”

Lotfy regrets that at the time she was making the movie she did not have enough funding to really delve deeper into the memory of the people of Port Said. She said that given the time, she would have done things differently. The film was made in only three days; however, it skillfully shows the artistic culture of music and dance.

In the film Lotfy interviews one of the fedayeen [volunteer fighters] of the city who assassinated Head of the British Military Intelligence John Williams in 1956. The man is Saeed Asran [died in 2004], and in the film he recounts the whole tale of what happened. He hid the bomb with which he assassinated Williams in a loaf of bread and then he waited for the right moment when the car carrying Williams came close. He tossed the bomb inside and then ran for his life. He also recounts how his own brother was run over by a tank.

Lotfy explained that the art of El Semsemya is a sailor’s art, and therefore it is common in countries of the Red Sea and the Mediterranean. She said that many songs were influenced by people from Yemen, Syria, and others. The art depends on improvisation and so the songs usually change as they land in other countries.

The film was shot in 1995 so it shows Port Said at a time of prosperity and when the city was just regaining its traditions. “El Semsemeya was trying to regain its power. [People of] the city were still trying to regain their relationships with each other,” Lotfy said. She explained how El Semsemya is used to tell the story of the city: “Popular culture depended on oral communication in the past and that meant people learned the songs by heart. Now they are starting to document them in writing; people are trying to record the songs and write down the lyrics. [El Semsemya] is a great reference for other different types of music with its beats and poetry.”