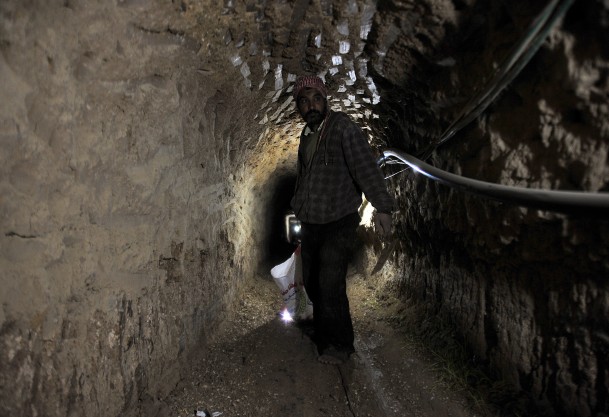 Eyewitnesses in Rafah said that on Tuesday the army continued its campaign of destroying tunnels located in the city’s Salah al-Din neighbourhood leading into Gaza.

A security source said that the campaign, led by the army’s Corp of Engineers, would continue daily. The source went on to say that the army had discovered a number of new entrances leading to the tunnels, located far off from the city’s residential areas, which would facilitate the army’s ability to destroy them without breaking into residents’ homes. He added that in addition to blowing up the tunnels, methods such as flooding or filling them with sand and rocks were also being used as a means of making them inaccessible. He added that special commando units had also been used to infiltrate and destroy some of the tunnels. He further went on to state that eight trucks had recently been caught and apprehended while in the process of transporting smuggled fuel into the Gaza Strip.

City residents said that the sound of tunnels being destroyed could be heard late into the night. Residents further reported that 235 tunnels had so far been destroyed.

It was added that this was the first time in a month and a half that the army had resorted to using explosives, as opposed to other means, to destroy the tunnels.

Residents attributed this to the army taking heed of previous complaints made by citizens saying that the flooding of tunnels destroyed the land and soil of houses located nearby.

The government stated that since the first week of February it has undergone a process of destroying tunnel networks leading into the Gaza Strip transporting arms, goods, fuel and individuals across the border. Essam Haddad, presidential foreign affairs aide, stated on 18 February that Egypt would not allow for the smuggling of weapons to and from Gaza, saying that this would lead to the destabilisation of the Sinai Peninsula.

He added: “We don’t want to see these tunnels be used as ways to smuggle people and weapons into Egypt in a way that will damage the country’s stability and security.”

The army stated that it operated freely when it came to the issue of destroying tunnels leading into Gaza, and that it was not under pressure from any other institution, foreign or domestic, to do so. Destruction of the tunnels has been deemed a critical part of operation “Eagle”, launched in August 2012, after unknown assailants attacked an army outpost located in Rafah, killing 16 soldiers.

The campaign to destroy the tunnels has been in place for over a month and has succeeded in reducing the amount of smuggled goods going into the Gaza Strip by 60%, a fact which has had a profoundly negative effect on the standard of living of its residents, who have recently been suffering from a fuel crisis and shortage in the availability of construction and building materials, according to recent statements by residents.

Israel began a blockade of Gaza in 2007 after Hamas took control of the strip, forcing its 1.7 million residents to rely on the construction of tunnels in order to obtain basic building materials and resources.