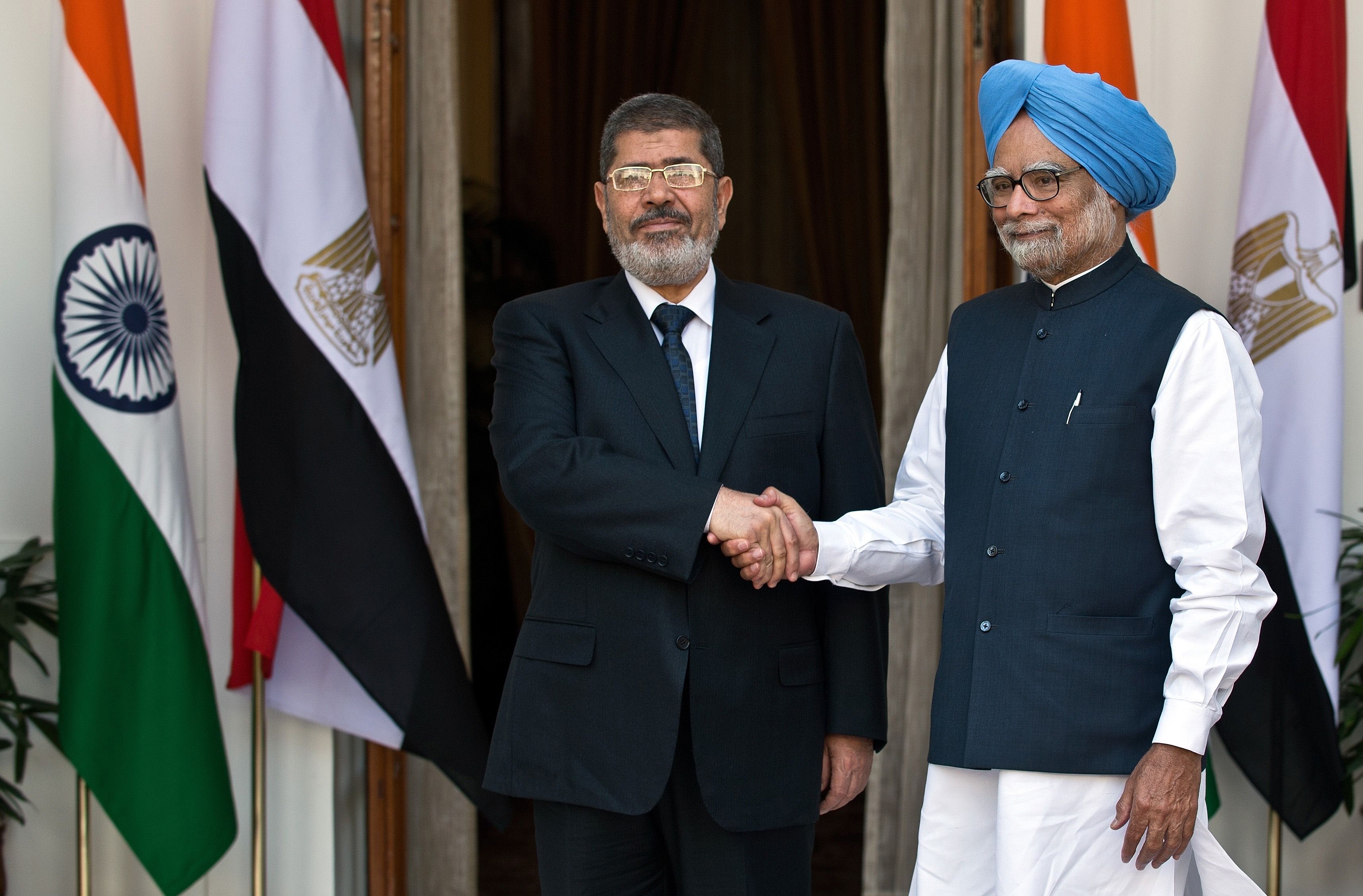 President Mohamed Morsi arrived in India on Tuesday for a two-day visit, where he held talks with Indian leaders on enhancing bilateral cooperation between the two countries and discussed regional developments in Syria and Palestine.

After departing from Pakistan, Morsi landed in Delhi International Airport in the early hours of Tuesday.  After being received by Indian president Pranab Mukherjee, Morsi, along with a high-level delegation composed of seven minister-level officials, met with Indian Prime Minister Manmohan Singh.

During the talks with the Indian premier, Morsi discussed recent developments in Palestine and Syria. He spoke about the importance of supporting the “legitimate rights of the Palestinian people to form their independent state,” according to a presidential statement.

In Novemeber 2012, Egypt negotiated between Hamas and Israel to broker a ceasefire in Gaza. India praised Egypt’s efforts in trying to forge unity between Palestinian factions.

The leaders also discussed the bloodshed in Syria. Morsi called on India to contribute to resolving the ongoing political conflict and ending the violence there.

During his tour of Pakistan, Morsi also asked Pakistani President Asif Ali Zardari to assist in ending the conflict in Syria, which has left over 70,000 dead. Egypt supports the Syrian revolution and hopes for an end to Bashar Al-Assad’s regime.

The meetings between Morsi and Singh ended with the signing of five memorandums of understandings in the fields of information technology, supporting and developing micro-projects in Egypt, enhancing cultural heritage and establishing the first specialised centre of information technology in Al-Azhar University. They also signed two letters of intent: one on the launching of satellites, and the other on a project to develop solar energy in the Egyptian village of Qoriyshat, Marsa Matruh.

In a press conference following the talks, Morsi stressed the importance of boosting a bilateral trade exchange between Egypt and India. He called for doubling the amount of trade between the countries, asking Indian investors to increase their investments in Egypt, particularly in the Suez Canal. He invited investors to join the canal’s 190km corridor project which aims at connecting Africa and Asia.

Before ending his tour, Morsi met with the leader of the Indian opposition Sushma Swaraj  for talks on Egypt’s democratic transition. According to a presidential statement, Swaraj described the opposition’s efforts to enhance democracy and reduce partisanship.

Morsi’s trip to India is his first official visit as president. Ties between the two counties were strong during Gamal Abdel Nasser’s era, but during Mubarak’s time in power the bond between the countries was weaker.