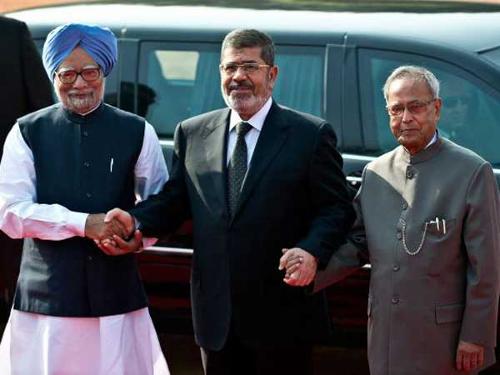 President Mohamed Morsi told Indian daily newspaper The Hindu that he hopes Egypt will join the ranks of the world’s emerging economies, known as the BRICS, once its own economy gets back on track.

The comments came on Monday during the president’s three-day visit to the country.

“I am hoping BRICS would one day become E-BRICS where E stands for Egypt. I hope E-BRICS would emerge when we start moving the economy,” the president was quoted in the paper.

BRICS, an acronym for Brazil, Russia, India, China and South Africa, encompasses a bloc of the world’s large, growing economies, which are projected to overtake the current major global economies during the first half of the 21st century.

He lauded the proposal for the establishment of a BRICS bank that would “support countries to achieve high growth rates and supplement the role of the IMF, World Bank and similar institutions”.

Morsi’s visit to India aims at strengthening ties and boosting trade and investments between the two countries.

The visit comes following official news of a recent economic agreement in which the two counties plan to boost mutual trade to $8bn per year by 2015.

After a meeting with Indian Trade Ministry officials, Saeed Abdallah, head of the commercial agreements department at the Ministry of Trade and Industry, said that local committees would be formed to monitor and expand trade ties.

The Indian government will also be funding a project to develop factories and training in Cairo’s Shubra Al-Kheima district.

“I am looking forward to a unique, strong, institutional and mutually beneficial relationship with India. For Indians, we can be a hub for North Africa and Africa as well,” Morsi said.

He added that Egypt will benefit from its relationship with India through establishing small and medium enterprises (SMEs), as well as benefitting from the India’s blossoming information technology and national defence industries.

In the interview with the paper Morsi expressed his hopes for a rather more prominent role for the Non-Aligned Movement (NAM) in countering what he described as a “unipolar world”.

He conveyed interest in working with Indian leaders and figures towards establishing this.

In the last quarter of 2012, GDP increased by 2.2% over the previous quarter.