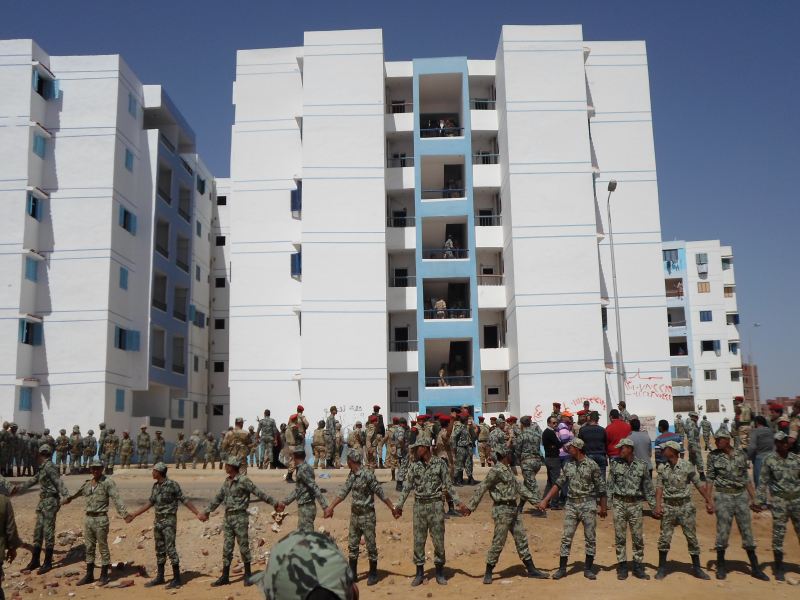 A group of protesters gathered in front of the military prosecution building in Suez on Wednesday against the dispersal of unemployed demonstrators the evening before in Port Tawfiq.

The protesters also demanded the release of six arrested protesters.

Personnel from the Third Field Army removed barriers erected by protesters in order to allow trucks to enter Port Tawfiq on Tuesday night so that they could continue loading and unloading ships at the port.

The Third Field Army evacuated 120 housing units which were illegally taken over by residents. “This comes within the framework of the efforts of the Third Field Army to impose security and stability in the streets of Suez and the preservation of lives of citizens and public and private property,” said the official spokesman of the Armed Forces in a statement on Wednesday.

The housing directorate of Suez had filed a report saying that inhabitants in three apartment buildings had no legal basis for their residence there, according to state-owned Al-Ahram.

The Ministry of the Interior took legal steps after the report was filed and worked to evacuate the building with the army.

The arrests were reportedly made when altercations broke out between those being evacuated and military personnel.