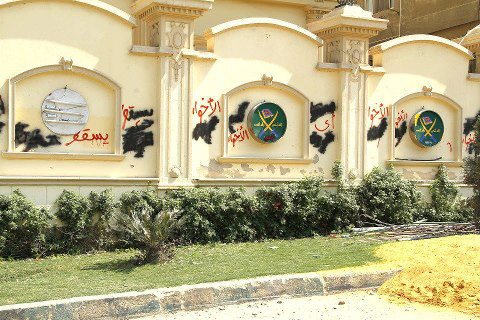 The Muslim Brotherhood held a press conference on Thursday to address the issue of violent clashes that took place outside the group’s headquarters in Moqattam last Saturday and Sunday.

During the press conference the Brotherhood showed footage of protests outside its headquarters last week. The footage also showed graffiti that had been sprayed on the outside of the headquarters.

Murad Ali denounced the use of crude language, describing it as “beyond the   pale”.

Saad Al-Husseini said that it is the police’s responsibility to protect property but he pointed out that the Brotherhood has the right to defend itself. On the protests planned outside the headquarters on Sunday he said “If the police don’t protect our property, we will defend it with all we have”.

Some journalists interrupted Ahmed Aref whilst he was praising the role of the media due to earlier Brotherhood statements that implied members of the media were to blame for the clashes.

The Egyptian Organisation for Human Rights (EOHR) announced on Thursday that it had submitted a complaint to the Prosecutor General regarding the clashes. Hafez Abu Saada, head of EOHR accused the Brotherhood of attacking women, political activists and journalists outside the Moqattam headquarters. Abu Saada called on the prosecutor general to “investigate the assault on activists, journalists and women… and bring the accused to trial on charges of premeditated beatings, injuries and insults to the victims.”

Mohammed Hussein, the secretary general of the Brotherhood also sent a letter to the newly elected Press Syndicate chairman Diaa Rashwan, regarding the role of journalists in the clashes outside the headquarters.

According to the Brotherhood’s website Ikhwanweb, the letter calls on Rashwan to launch an investigation in to last week’s incidents. The letter was accompanied by a video allegedly “showing a photographer attacking Brotherhood headquarters security personnel to provoke and then photograph them”.

Sunday night’s clashes with the Central Security Forces resulted in 31 people being detained, in addition to 15 previously detained on Saturday night. Three Brotherhood members were also detained and are accused of assaulting journalists. Rashwan submitted a complaint to the prosecution regarding Sunday’s clashes.

On Tuesday a court released 15 detainees who were held in connection with the clashes outside the Brotherhood headquarters, a further 31 were released on Wednesday.

Al-Dostour Party and the 6 April Youth Movement both announced that they intend to protest outside the Brotherhood headquarters on Friday. 6 April will be calling for better protection of the freedom of the press and denouncing violence against journalists.

The protests will begin after the Friday prayers.