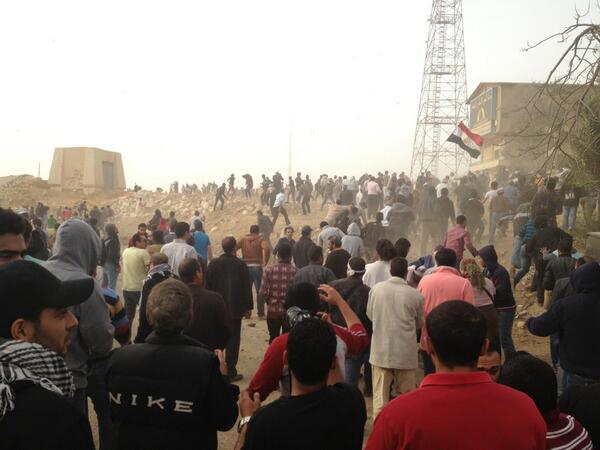 Hundreds of civilians faced off against each other on a day some opposition groups dubbed as the “Response of Dignity.”

Supporters of the Muslim Brotherhood rallied outside of their headquarters on Friday morning in support of President Mohamed Morsi and the group, which attained its legal status as a non-governmental organisation this week.

Central Security Forces (CSF) provided heavy security around the headquarters in anticipation of the arrival of anti-Muslim Brotherhood demonstrators.

Many demonstrators said they had come in response to footage showing a female protester being beaten by Muslim Brotherhood supporters in the previous week during a smaller demonstration against the group that opposition claims has undemocratically dominated the political sphere in post-revolution Egypt.

“We are here to get the rights of our brothers and sisters who have died, and our sisters who are beaten on the street,” said Mohamed, a 45 year old protester from Minya.

Protesters briefly exchanged rock throwing with police, but the confrontation did not escalate and the conflict between the two sides subsided.

An opposition march coming from Sayeda Aisha engaged in clashes with Brotherhood supporters in the nearby Al-Nafoura Square, near the entrance to Moqattam, where both sides threw rocks and sustained dozens of injuries. Shots were reportedly fired.

President Morsi blamed foreign elements of attempting to create a rift between the Egyptian people on his official Twitter account. “Our strength is in our unity,” tweeted the president on Friday afternoon.

Earlier in the day, people reportedly stormed the Muslim Brotherhood offices in Manial.