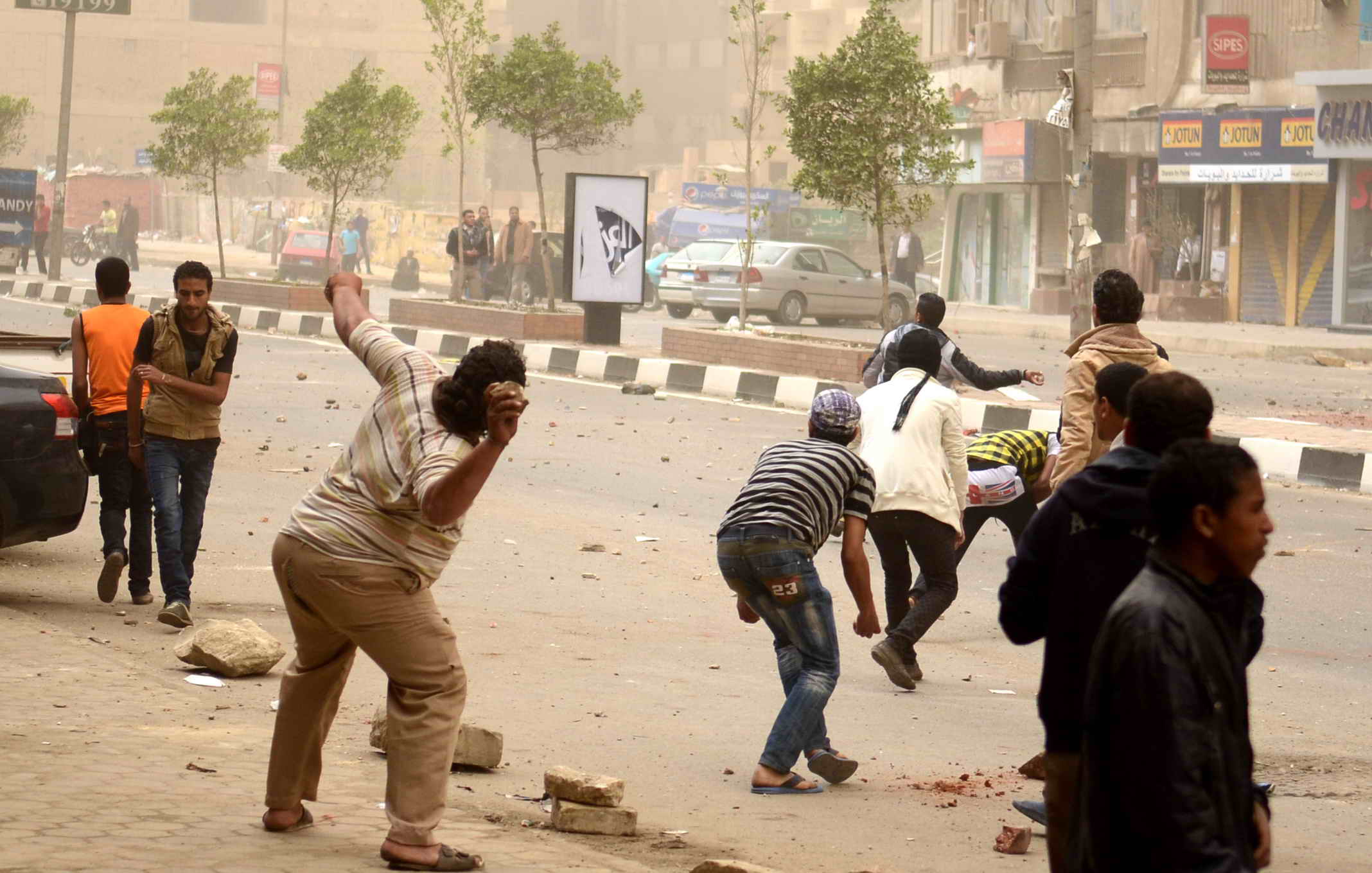 The European Union and the United States also expressed concern over the renewed clashes.

The Muslim Brotherhood and its political wing the Freedom and Justice Party (FJP) expressed thanks for their members in defending the headquarters, and condemned the violence instigated by “thugs”.

In a statement released on Saturday, the Brotherhood’s Supreme Guide Mohamed Badie thanked “the young brothers” present at the headquarters, “valuing their patience and exercising the utmost restraint in the face of attacks by thugs, despite the large number of serious injuries sustained in the ranks of their brothers”.

FJP Vice-Chairman Essam El-Haddad said the violence he witnessed “was as painful as the physical injuries it caused”, adding that the Brotherhood had survived three kings, four presidents, repeated attempts to destroy them and the assassination of their founder.

Saad Emara, a member of the FJP’s National Committee said the party condemns such violence “by any party whatsoever, just as we condemn desperate attempts to lure the Brotherhood into trouble”.

FJP Member of Parliament Abdul Hamid Al-Bhadi said he would submit a statement to the minister of interior asking him to arrest the “thugs who assaulted the youth and the girls and the Muslim brotherhood headquarters”. He called the protesters involved in clashes “saboteurs” which “serve the Western and Zionist agents on Egypt’s borders”.

“We are aware of these schemes to burn the country and we will not enable them to achieve their goals,” Al-Bhadi said.

A statement issued by the Masr Al-Qaweya Party on Saturday condemned the violent clashes which left at least 200 injured according to the state, saying that the violence deserves “condemnation from every Egyptian regardless of the perpetrator or the cause”. The party also placed the blame on the government, adding that every drop of blood that was spilt is a result of the failure of the government and its politicians “who only see their narrow interests” and are leading the country to failure.

Masr Al-Qaweya called the clashes “chaos” run by “a group of opportunists who are paying young Egyptians to die because of an attack on or the defence of a building which has no value”. The statement added: “The current authority is impotent and its security bodies have failed”.

“What are extremely worrying are the interviews with injured people and the unbelievable mobilisation of the Brotherhood from across the country,” Dawoud said. “There is clear collusion between the Ministry of Interior and the Brotherhood,” he added, pointing at the large number of arrests of members from the opposition camp. “The Central Security Forces only stepped in when protesters tried to storm the headquarters; when protesters were attacked the ministry was silent.”

Dawoud said the decision to mobilise so many Brotherhood members to protect the headquarters essentially means the Brotherhood “officially declare themselves a militia ready to confront their opponents”. He added that the minister of interior “is clearly seeking to prove his credentials to the president who appointed him”.

The NSF and the parties which comprise it do not participate or call for these protests. “It is a personal decision for the protesters,” Dawoud said. “The Brotherhood should stop deceiving themselves with conspiracies. This is public anger against the way [President Mohamed] Morsi has ruled the country; his failure to satisfy the revolutionary demands, failure in security and so on.”

Deputy Chairman of the Shura Council’s Human Rights Committee Ezzedine Al-Komi, also an FJP official, said those who attacked the Brotherhood headquarters “are not peaceful protesters but thugs and hooligans involved in the counter-revolution”.

Foreign Affairs High Representative of the EU Catherine Ashton issued a statement on Saturday expressing “concern at reports of renewed violence in Cairo and more generally at the general climate of increased domestic instability in the country.” According to the statement, Ashton “calls on all parties to enter into a broad-based and inclusive dialogue to overcome the current political stalemate and the serious political divide”.

US State Department Spokesperson Victoria Nuland said the US was worried about the clashes, adding that they have always supported “anyone with grievances in Egypt to express themselves peacefully”.

Nuland added that the US encouraged the Egyptian government “to lead a wide, broad dialogue to deal with popular frustrations”, both economically and politically. She also said security forces must exercise restraint.