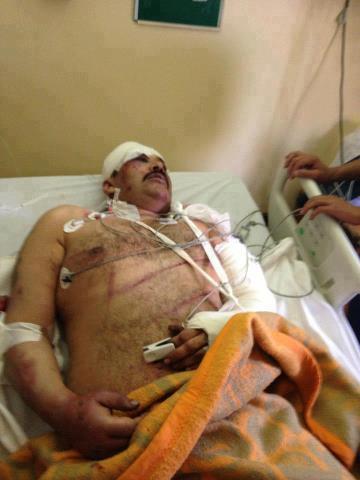 The Maspero Youth Union (MYU) declared on Saturday night that Amir Ayad, the Coptic activist who went missing during Friday’s clashes in Moqattam, was abducted by members of the Muslim Brotherhood. The statement was made to a Christian news outlet which MYU confirmed is authentic.

According to the interview, Ayad said he was taken to a mosque where he was beaten and detained.

Ayad was found Saturday morning covered in bruises and showing clear signs he had been whipped. Member of MYU’s Political Bureau Mina Magdi El-Qess said Ayad’s condition is improving and he may need surgery before he is fully recovered.

Free Egyptians Party Spokesperson Shehab Wagih said he believes Ayad was targeted because of his work surrounding the detained Copts in Libya. “On Thursday morning he held a press conference in Shubra,” Wagih said. “He made a speech in which he spoke about the way the Muslim Brotherhood, or the current regime, deals with expatriate Egyptians.”

Ayad is a member of the fact-finding committee tasked with investigating the treatment of Copts in Libya, after hundreds of arrests and the death of a Coptic Christian under torture sparked anger in Egypt’s Christian community. Ayad was critical of the government’s handling of the Copts imprisoned in Libya. Egyptians have been imprisoned for a wide range of reasons, including proselytising and visa issues.

“When Ayad was taken, he was alone,” Wagih said. “This is a strong indicator that someone had a reason to take him.” Wagih said that having occupied several positions of power, the Brotherhood are filling people’s minds with crazy ideas.

At the time of writing Ayad was still in the hospital. Wagih said he is neither able to speak clearly nor for long periods of time. “He is still fainting from time to time but doctors said they expect his condition to continue improving.”

Magdi El-Qess added that Ayad has a fracture in his skull and hand, as well as a dislocated shoulder. “He is in a dangerous condition and although doctors are hopeful he will improve, they say it will take some time.”