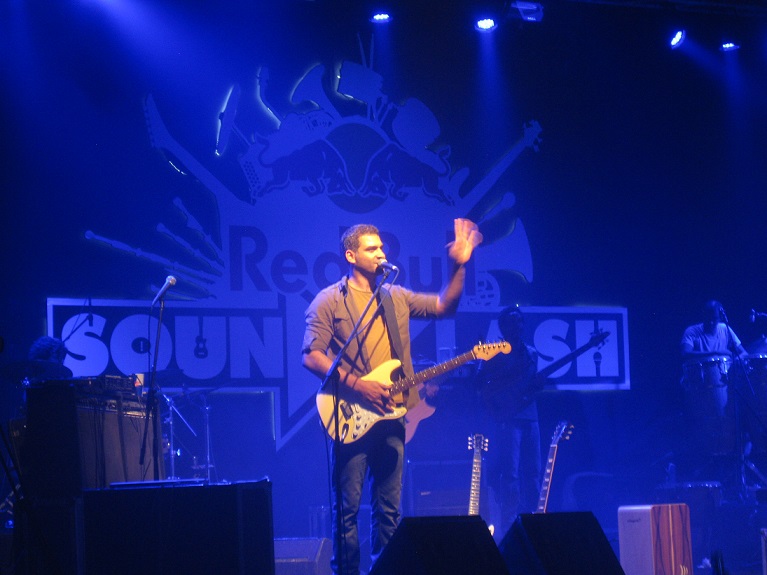 Red Bull hosted Cairo’s first Soundclash on Thursday night. The event pitted two of Egypt’s top bands, Cairokee and Wust El-Balad against each other in a four-round battle, each with its own twist.

The bass from the sound system could be heard pounding through the ground even from the entrance of Cairo Festival City. Two stages at either end of a blacked out festival tent provided the battleground for the clash between the duelling bands. The space in between the stages was packed with music lovers from start to finish.

The doors opened at 6pm, with the DJ entertaining the crowd until the bands appeared at 9pm. A promotional stand giving away personalised t-shirts with inspirational messages also kept the crowds busy as we waited for Soundclash to begin.

Cairokee kicked off the live music in the first ‘Warm up’ round, playing three of their own songs to get the crowd going. Wust El-Balad followed up with three of their own on the other side of the performance tent. It was clear from the beginning of the evening that Cairokee had the edge on crowd support, although Wust El-Balad had a strong fan base at the event.

The audience were the judges of the competition. The master of ceremonies for the evening invited the crowd to cheer for their favourite band at the end of each round, which was recorded by an applause meter on the large screens flanking the stages.

The warm up was followed by three rounds, which tested the abilities of the bands to adapt to each other’s style of music and to randomised genres. The first round was called ‘The Cover”, in which the DJ played a song and each band had to provide its own take on it. Wust El-Balad went first applying their eclectic oriental sound, followed by Cairokee’s distinctive electric rock sound.

After the first round the applause meter showed that Cairokee were the victors and it was time for round two: “The Take-Over”. Each band played a song from their own repertoire and half way through the other band had to pick up the song and finish it. The crowd lapped up the musical prowess demonstrated by both sets of musicians showing off their abilities and playing each other’s songs. Hany Adel, lead vocalist for Wust El-Balad signalled his respect across the room while Cairokee played a Wust El-Balad song.

The second round also went to Cairokee on the applause meter, confirming the crowd’s slight bias towards Cairokee from the beginning of the night, but Wust El-Balad had a dedicated fan base in front of its stage with many forming the letter “W” with their hands.

The third round, “The Clash” was probably the most challenging of the evening as it gave the bands a chance to show off the full extent of their talents, delving into different genres. Each band played three more of their own songs, however they had to adapt the song to fit a certain genre. The bands tackled reggae, electronic and oriental. Wust El-Balad had the edge on the reggae song due to its variety of percussion instruments; however Cairokee came back in the electronic round with a dubstep–esque performance, which blew the crowd away.

Again the applause meter gave the round to Cairokee although it was much closer than previous rounds. The fourth and final round was ‘The Wild Card’. This we were not expecting. Cairokee played their wild card first which came in the form of Egyptian folk-singer, Hakim. The crowd went wild for this surprise but it was nothing compared to what Wust El-Balad had in store. Half way through their song Ahmed Adaweyah was helped on to stage by two minders.
The crowd went wild as the legendary, yet fragile artist refused a chair and broke into song. He looked to thoroughly enjoy the experience and Adel and the other members of Wust El-Balad were visibly star-struck during Adaweyah’s performance.

The crowd were in a state of shock from the surprise appearances but the evening was not over yet. Cairokee crossed the tent and joined Wust El-Balad on stage for a joint performance. Before they began Adel thanked everyone involved in the event and told people to move away from the mainstream and to listen to the up and coming bands around Egypt. The applause meter was tested just once more and went up to the 90s for the final performance. No victor was announced but it didn’t matter after a night of spectacular musical performances.

The night was an all round success, there was variety, surprises and quality performances. It was clear that every musician was talented and it showed just how good the Egyptian music scene is. Wust El-Balad and Cairokee are just the top layer of a much deeper underground music scene which is still emerging.