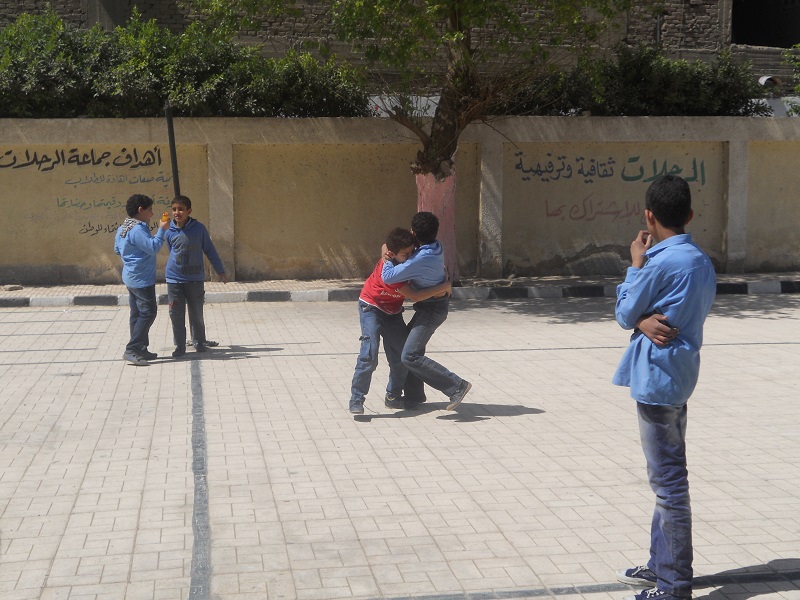 Beating students in Egypt is endemic, especially in public schools, where students from poor families are granted free education. Using violence with children inside schools, regardless of their age, has grabbed several headlines in the past few months. Numerous YouTube clips have shown occasions where schoolchildren queue up at their teacher’s desks to be beaten with a stick, after having their homework corrected. Other videos show sobbing students being beaten by a teacher with a long hose. About a month ago in the Upper Egyptian city of Luxor, it was reported that a teacher cut the hair of a girl for not wearing the veil.

Maryam Ramsis, a mother of two, said her elder son, Meena was beaten several times by the school principal for not completing his homework. The seven-year-old pupil suffers Attention Deficit Hyper-activity Disorder (ADHD), a mental disorder that is characterised by difficulties of inattention or hyperactivity.  The school has not been considerate to his case, the mother claims. “I have submitted many complaints against the school head, but every time officials inside the Ministry of Education, which supervises the school, tells me that my complaints have been upheld,” she says. Blaming this to nepotism, the mother states that the school head is well connected to top officials in the ministry. Therefore, there has not been a proper investigation into her son’s case.

Although the school is certified by Abbaseya Psychiatric Hospital to handle Meena’s mental and psychological condition, the mother highlights that the school’s principal Asmaa Fahmy has beaten him twice with a broomstick on his legs. “She also told him that he is a retard and that he only understands what she says through beatings,” Maryam says.

Dr Omneya Mohamed, a child psychiatrist, explains that beatings in schools is one of the most “pressuring attitudes” against children. Students’ reactions to violence differ from child to child according to their upbringing and psychological experiences. “Beatings in all cases, regardless of the child’s age, can result in drastic psychological consequences,” she says. Lack of self-confidence, phobia from schools and classrooms, oppression, mental illness and lasting emotional damage are the minimum upshots of using violence with students. Schoolteachers wrongly utilise violence as a way of discipline. On the contrary, it is a way for them to vent their anger, Mohamed explains. “Spanking might get quick results for the teacher, but we can never assess the extent of its danger to the students. It is completely destructive,” says the psychiatrist.

Kamal Al-Sayed, an Arabic language teacher at Meena’s school, claims that he rarely uses the broomstick to punish his students. “It is only when the students start to be out of control that I use it to regulate the class,” the teacher says, who keeps a broken broomstick near his desk. He denies that neither him nor any of his colleagues at schools use sticks to punish the students.

But Meena says the teacher has struck him once for arriving late to the class. “Mr Kamal hit me on my hand with the broom when I entered after the bell had rung,” Meena said, affirming that he has seen three of his classmates being beaten by the same teacher.

Ahmed Meselhy, a lawyer specialised in children’s legal cases, says there are many different scenarios of violence used with children in schools. He affirms:  “All schools in Egypt practice some sort of violence against students.” Meselhy explains that according to Article 3 in Egypt’s Child Law, violence is completely banned against children, whether verbal or physical. However, there is no law that criminalises beatings in schools. “Spanking is forbidden in schools but is not considered illegal,” he says.

Several handouts and ministerial decisions have been distributed across the country’s governmental education departments banning corporal punishment against students, but the lawyer describes them as “meaningless”, saying: “Although almost all teachers know that they shouldn’t beat their students as a form of discipline, nobody adheres to the rules.”

Meselhy explains the legal procedure that should follow any reported cases of violence used against students. He says that if a teacher beats a student brutally, the school principal should report the incident to the nearest police station. The report is then turned to the education department supervising the school and the prosecution looks into the case for further investigation. “If a teacher has caused an injury to a student, he is then vulnerable to a three-year jail sentence,” says Meselhy, adding that violence against children is manifested in any sort of physical harm, verbal insults and discrimination against students.

In some incidents, the teacher is punished by being suspended from his job, transferred to an administrative position in the school and/or punished with salary cuts. If the student was proven wrong, which can hardly be proved according to Meselhy, he would only be suspended from  school for a month maximum. According to the lawyer, who also works in a non-governmental organisation specialising in child development, there have been more than 20,000 cases reported for beating students throughout the past year. “There are many other cases that couldn’t be reported,” he says.

Heba Mohamed, who receives complaints through the hotline of the Egyptian Association for the Advancement of Childhood, says that in March only, more than 10 cases have been reported to the organisation.

Sherif Abdel Hameed, a father of a four-year-old girl, is one of the stories reported to the association. He narrates that his daughter, who attends kindergarten in one of the private schools in New Cairo, has been punished for allegedly cutting the hair of her colleague. “I received a call from the school principal asking me to come pick up my daughter because she is sick. I realised later that they locked her in the classroom as punishment until her temperature reached 40 degrees and she fainted,” he said.

Abdel Hameed said his daughter could never have the ability, being a young child, to carry a pair of scissors and cut the hair of the student beside her. Even if that has happened, the father chides the teacher’s reaction by locking his daughter up in the classroom.

Meselhy comments on this case stating that many schools prefer to defend their teachers rather than admit their faults. “It is easier for them to condemn the parents and the student’s upbringing than put their teachers in trouble,” he said.

But despite the reported cases, some parents are apparently accepting of the fact that their sons and daughters are “slightly beaten” by their teachers. As the school day ends in Ibn Sandar School, parents stand at the school’s gate to pick up their children. The gatekeeper, Am Hamed, also stands with a broomstick in his hand to prevent students from getting outside the school. “I don’t beat them,” he says, stressing that he only threatens them to stay inside.

Neveen Mohsen, a mother who comes to pick her son, says she doesn’t mind her son being beaten as long as he is not injured. “He has to be beaten by his teacher in order to do as he is told, otherwise the teachers will not be able to teach him properly,” she says. However, she says that she won’t allow a teacher to harm her child by smacking him brutally. “There are limits though. But as long as the kid doesn’t listen to his teacher, the teacher has to beat him to stay respected by the students.”

Another parent, Fatma Abdel Karim, agrees. “I would tell the teacher break his arm and I will fix it at home. I sometimes beat him at home so  that he does as he is told,” she says.

Officials at the Ministry of Education denied that corporal punishment against students in schools is on the rise. Mohamed Al-Sorougy, the ministry’s spokesperson, said only 32 cases have been reported since the beginning of the education year in September 2012. He highlights that the ministry deals with about two million students and teachers. “This number is nothing compared to the large population in the education sector,” he said. He added that many of the cases reported have already been resolved. “I need to stress that some incidents are minor and that the ministry has repeatedly announced that beating students in schools is unacceptable,” he says.

In October 2012, Minister of Education Ibrahim Ghoneim stated that beatings in schools are acceptable as long as they were not brutal. Al-Sorougy denied this statement affirming that the minister has publicly denied saying such a statement. However, Meselhy said that the Ghoneim is a member of the Muslim Brotherhood, and thus believes that corporal punishment restores the “prestige” of the teachers and help them control the students. “This is completely incorrect. I would say that the main reason for beatings in schools stem from the fact that many of the teachers are under qualified,” he says.

Teachers in many public Egyptian schools are graduates of higher institutes that are not related to education. Ahmed Al-Halawany, head of the Teachers’ Syndicate, agrees. “Half the number of teachers educating in Egypt are not suitable for the job,” Al-Halawany says. “They are not aware of the proper learning tools neither the basic rules to deal with students at all ages.”

According to Al-Halawany, the syndicate condemns teachers who beat their students to endorse discipline.  However, he highlights that teachers in the country undergo “inhumane conditions that hinder them from practicing their job properly.” Classes are overcrowded and schools are understaffed. Salaries of teachers in the average public schools do not exceed EGP 700 per month. “Teachers struggle to bring order to classrooms. Besides, they are not satisfied enough with the income of their profession,” says Al-Halawany.

Some officials blame the 25 January Revolution for the increasing incidents of teacher-student violence. Reda Mossaad, deputy minister of education, says students who witness protests in Tahrir Square, come to school and want to emulate what happens in the political scene. “A student in preparatory or secondary school does not have a genuine political inclination. So he comes to school and tries to protest using the same violent tools used in the city squares.

Teachers would then sometimes resort to corporal punishment,” he says. Commenting on the YouTube clips showing students being brutally beaten by teachers, Mossaad denied that beatings in schools are on the rise. He confirms that cases as such are considered “insignificant” compared to the large number of students enrolled in schools.

As Mossaad referred to politics as one of the reasons why violence erupts in schools, Atef Al-Said, father of six-year-old Omar, says his son was slapped on the face by his teacher for criticising the Muslim Brotherhood. He narrates that after the end of a school day, Omar wore the mask of the Black Bloc, a group of protesters against the Muslim Brotherhood who don black clothing and masks, as he tried to leave his the school.

Omar’s teacher saw him and asked him about the mask. When the student told him he is wearing it to support whoever stands against the Muslim Brotherhood, his teacher slapped him on his face and kicked his legs two times. He explains that the following day, Omar was insulted during school assembly for voicing his political views against the ruling regime.  Meselhy says many cases reported in schools are related to politics. “I would say that Morsi’s regime and the spreading brotherhood influence in the country’s institutions have led to many violent cases inside schools,” he says.

Omar’s father, Al-Said also highlights that beatings in schools is embedded in the entire education system.  “The school curricula are incompatible with the students’ ages and skills. No creativity exists in our educational systems. Students grow up learning some information that will be forgotten the following year,” he says. Eventually, all that remains in a child’s memory is every minute he was harmed by his teacher.