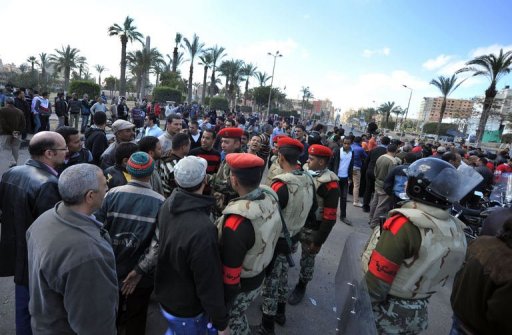 Police have returned to the streets of Port Said after they withdrew from the city over two weeks ago.

Resident of the restive city Ibrahim Al-Sayad said no one has clashed with the police after they reappeared on the streets in their uniforms on Sunday. He said that policemen were seen in several parts of the city like Port Fouad and in an area near the ferries.

State-run news agency MENA reported that the police are back in full force and that they have already started targeting violations in markets and crowded areas.

Al-Sayad said that in the past two weeks, policemen did not have any presence on the streets. “Most of their presence was inside police stations and they would be dressed in civilian clothes,” he said.

He added the city is in a state of extreme calm, “apart from the state of grief”. Al-Sayad said life is almost back to normal in the canal city and there are no signs of protests.

The police withdrew from the city after unprecedented clashes took place between police and protesters two months ago.

The clashes started on 26 January and repeatedly renewed in February and March. They were initially fuelled by Port Said’s residents angry over the verdict of the Port Said massacre trial in which the court decided to sentence 21 defendants to death.

The violence left at least 40 dead. During the unrest, residents of the city started a civil disobedience that spread to other parts of the country. Amid the clashes, the Port Said director of security was replaced in a failed attempt at alleviating tensions in the city.