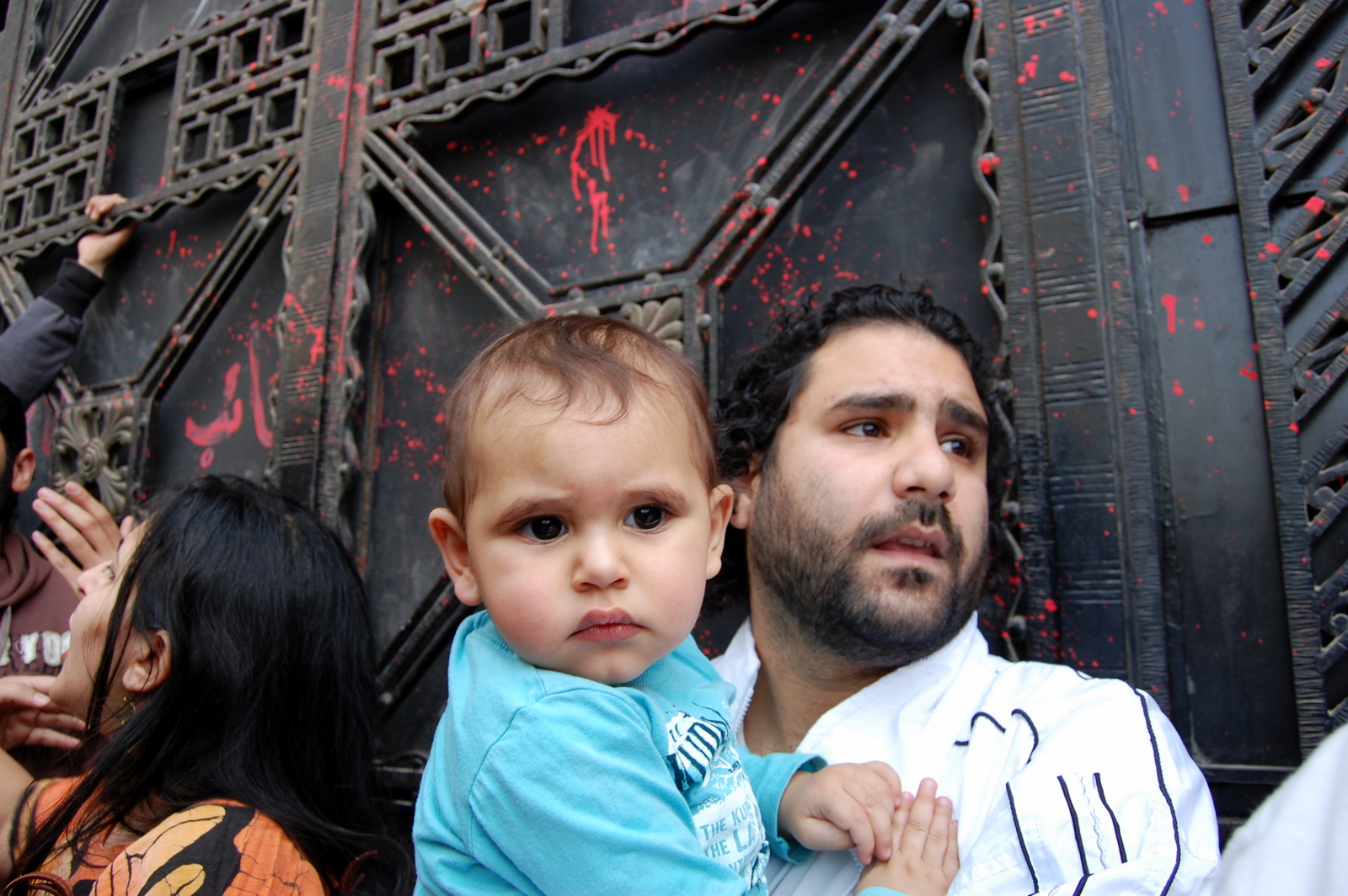 Cheers erupted in front of the High Court building on Tuesday as political activist and blogger Alaa Abdel Fatah was released after turning himself in earlier that day amidst a crowd of 200 protesters.

The prosecution on Monday issued arrest warrants for Abdel Fatah and four other activists as well as summoning a sixth for questioning over accusations of inciting violence against Muslim Brotherhood members ahead of the Friday clashes in front the group’s Moqattam headquarters.

Abdel Fatah was only temporarily released, the prosecution said. He claims to have refused to answer the prosecutor’s questions while the prosecution spokesperson released a statement alleging that Abdel Fatah had denied ownership of the Facebook and Twitter accounts he was being questioned over.

Abdel Fatah said he would turn himself in to avoid being a fugitive of the law but that he would refuse to answer questions in the investigation because he does not recognise Prosecutor General Tal’at Abdallah’s legitimacy.

“Alaa will give a statement saying he does not recognise the prosecutor’s legitimacy and will then refuse to answer questions, the same way he did when the military prosecution summoned him [in late 2011] and he refused to recognise its legitimacy,” Abdel Fatah’s father and veteran human rights lawyer Ahmed Seif Al-Islam Abdel Fatah said.

He added that Abdel Fatah would request a statement of his refusal to recognise Abdallah’s legitimacy be attached to the case papers if it goes to court.

Seif Al-Islam said this was an example of a political party using its influence in the state to settle political scores.

“President Mohamed Morsi appointed the prosecutor general personally and Morsi is a member and former leader of the Freedom and Justice Party, the political wing of the Muslim Brotherhood, which is involved in this case. There is a clear conflict of interest,” he said.

“If they are going to detain Alaa then we welcome it. It is a source of pride for us, Alaa was imprisoned under [former President Hosni] Mubarak, the Supreme Council of the Armed Forces and now he will be imprisoned under Morsi,” added Seif Al-Islam.

Abdel Fatah arrived with his wife and infant son to the High Court Complex, which doubles as the prosecutor general’s office, amid cheers of support from the crowd who chanted “Oh Alaa, your imprisonment will free this country”.

Crowds also chanted against the prosecutor with shouts of: “How much did you sell the blood of the martyrs for?” and “The Egyptian revolution is not for sale”.

Members of the Al-Dostour Party, 6 April Youth Movement and Al-Tayar al-Shaaby attended the demonstration to protest the issuing of warrants for the arrest of activists who are members of their organisations.

Several political figures such as former presidential candidate Khaled Ali also attended the rally in support of Abdel Fatah and the other activists. Ali led chants against both the Muslim Brotherhood and military rule.

Among those present was Al-Dostour and National Salvation Front Spokesperson Khaled Dawoud.

Dawoud added that the prosecutor general’s latest decisions and Morsi’s recent speech have created an “atmosphere of fear” and described the day as a “black day” for the rule of law.

“President Morsi should be grateful to these young people, not imprisoning them. They got him elected president. They started this revolution, which got him out of prison, and now he is imprisoning them. It is a major irony,” he said.

The opposition spokesperson denied NSF would be taking any legal action, saying they already filed several cases and that the “private prosecutor” ignored them. “What legal action? They have legal action under their control,” he said sadly whilst pointing at the High Court Complex.

Abdel Fatah had tweeted several times from inside the prosecutor’s office, indicating that he was being questioned over Twitter comments he had received.

“At least the guys before you knew how to trump charges properly,” he tweeted.

The prosecution’s official spokesperson said in a Monday statement that arrest warrants and travel bans had been issued for Alaa Abdel Fatah, Ahmed Douma, Ahmed El-Ghonimy, Karim El-Shaer, and Hazem Abdel Azim for accusations of inciting violence and causing the Friday clashes in front of the Muslim Brotherhood’s main headquarters in Moqattam.

Political activist Nawara Negm is to be summoned for questioning. She faces the same accusations. Douma is a member of Al-Tayar al-Shaaby while Abdel Azim and El- Ghonimy are Al-Dostour Party members. The rest are independent opposition activists.