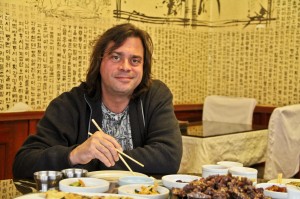 Not long ago I wrote about the renewal of Left Bank and wondered about the absence of a fine-dining culture in Egypt. I asked why people are afraid to try new things, why every café sells the same, bland pastas and sandwiches, why every restaurant feels compelled to put a limp, soggy Caesar salad on its menu, and why we cannot eat as well in Cairo as we can in London and New York. I am still thinking about it.

The answer, I now believe, lies mostly in the clientele. Restaurants offer what they believe their customers want because this is how they make money, and that’s what they are interested in—making money, not making food. Which is their right, but does not do much to advance culinary culture. Some argue that chefs and owners should try to educate the public, but this will never work if the community is not ready, if the groundwork has not been laid.

Ten years ago I opened with two partners a Japanese-Italian place. The cooking was innovative and well-executed, but Zamalek was not ready for smoked salmon and wasabi pizza or miso pasta. It is probably not ready for it now. My guess is they are not even ready for authentic Japanese cuisine. We’ll have to see how things go with Makino, the new Japanese restaurant at the Hilton, but when we used to serve proper sushi we discovered that our customers preferred the faux westernised version—large, compact, perfectly shaped rice rectangles topped with small pieces of fish then drenched in soy sauce. Mmmm that soy and rice is so satisfying.

They were so accustomed to this fake version of sushi that if they tasted the fish—if the fish actually tasted like fish—they imagined it was off. Salmon smelling like the sea? Can’t be good. The restaurant that took the space after we became disillusioned with the lack of sophistication of the general dining public, Trattoria, is doing fine because they serve tomato soup, grilled chicken breasts, a salad with balsamic vinegar and parmesan and spaghetti Bolognese.

In London and New York the market is large enough to sustain pricy restaurants with experimental tasting menus—now. Twenty years ago this was not true, which means that fine-dining culture here is just over the horizon. Soon Egypt will have its own food network, televised cooking reality shows, celebrity chefs and a public hungry for more.

Twenty years ago no one in the West knew who Gordon Ramsay and Jamie Oliver were; today they are household names; here they soon will be too. Why? Because it’s cool. Remember, only ten or fifteen years ago, suggesting to your friends that they should eat slices of raw fish drew gasps of horror and disgust. What changed? It certainly was not the sudden entry of new sushi restaurants into the market. These followed the trend—a trend that started among the well-traveled and wealthy and worked its way quickly through the social fabric. Today sushi is ubiquitous. You can even purchase it from coffee shops. Another restaurant trend that was non-existent in 2000. We’ve seen lots of changes already.

And again, Americans and Europeans weren’t born this way. Only in the past few years have food and cooking become major preoccupations in the West; now people are positively competitive about it. Knowing the latest hotspots, having dined in celebrity restaurants, being able to tell the difference between ginger and galangal: all these hold a certain social cachet. Some sort of critical mass was reached and it became hip to be a foodie.

I wouldn’t at all be surprised to see a Gordon Ramsay or a Jamie Oliver restaurant open here within the next five years. Already foodism is catching on among the uber elites, which means the rest of the upper classes and the middle classes will be following the trends directly. Just as happened with cafes and sushi joints. Just as has happened already in places like Beirut, Doha and Dubai. The signs are all there: the accelerated pace of restaurant openings, students choosing culinary school over college, cooking competitions, the growth in websites, Facebook pages and Twitter accounts devoted to food, the rapid spread of restaurant reviews both in print and online. What really brought this home to me? Last Saturday I wanted to take Her Royal Self to Left Bank for lunch. We couldn’t get a table.