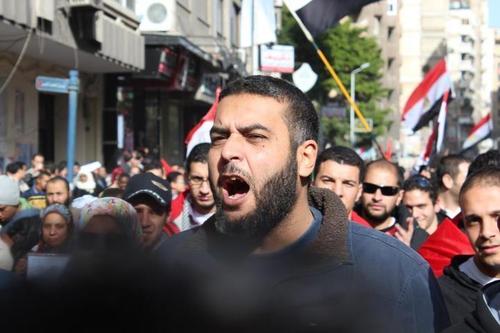 Mohamed Yousry Salama was 39 when he passed away due to a stomach illness earlier this week.

Salama was born on 1 October 1974. He lived and died in Alexandria.

Salama’s friend of more than ten years, Ramy Al-Banna, said Salama grew up in a well read house. Salama’s father had a big study which Salama was very fond of. His father was a professor of literature in Alexandria University, his mother “a great poet,” Al-Banna said.

Salama was highly educated and a seeker of knowledge. He went to English-language schools and through his fluency in English her was able to access a lot of research, including books on modern philosophy. He was talented in several arts and loved history and the science of language.

Salama’s upbringing was both religious and patriotic. He studied Islam with scholars in Saudi Arabia, India, and the Arab Maghreb countries as well as with Egyptian tutors.

He was a dentist and had a profitable clinic but gave up that profession to spend more time with his books.

“He was a very patriotic man… His mother knows the meaning of the word Egypt. She is a great lady,” Al-Banna said.

Before the 2011 Revolution, Nobel Laureate Mohamed ElBaradei led a campaign calling on the government to make reforms. Salama and Al-Banna signed ElBaradei’s demands for change. Salama took part in the 2011 revolution, which in turn changed him forever.

After the toppling of former president Hosni Mubarak, Salama became involved in national politics and joined the Salafist Al-Nour Party. He challenged some of their ideas on dealing with national interests and eventually left the party in August 2011.

He moved on to cofound the liberal Al-Dostour Party. Maha Mekawy, another co-founder of Al-Dostour party, said he left Al-Nour Party because understood religion correctly and valued the freedom of creed and opinion. She said Salama found differences between his understanding of creed and Al-Nour’s opinion on the subject.

Yasser Al-Hawary, who is also from Al-Dostour Party, said Salama was a Salafi but was unique, because he supported the idea of coexistence between people with different opinions. His idea was that “I believe in something and you believe in something else and we have to be friends,” Al-Hawary said.

His thoughts and his way of living were Salafi, and he was a Salafi when it came to everything related to religion. Al-Hawary, on the other hand, is a liberal. He recalls that Salama once told him that the two of them formed an invincible team because of their differences.

Al-Hawary and Mekkawy both said that Salama’s presence in their party gave them strength because whenever the party was accused of being secular, they would point at his Salafism to illustrate that with such members they could not be secular.

Towards the end of his life, Salama was very frustrated. Al-Hawary said he felt that things could not continue as they are in Egypt.

Salama ate at a restaurant about three weeks before his death, contracted a microbe and became sick. Although Salama was a dentist, he did not like to go to doctors or go to hospitals.

Al-Banna tried several times to convince Salama to go to the hospital but Salama repeatedly refused. By the time Salama went to a hospital last week, it was too late. Salama died last Sunday and his funeral in Alexandria attracted large crowds.

Mourners at his funeral consisted of both Salafis and liberals.

On Monday a funeral ceremony was held for him in Alexandria, with another planned for Cairo.

Salama’s family said they are saddened by the rumours circulating after his death that he was killed by poisoning.

His family released a statement on Tuesday stating that Salama was sick for nearly three weeks and suffered from a fever during his illness before he was admitted to the New Medical Centre. On the fourth day of his hospital stay, he was admitted to the Intensive Care Unit because he had difficulties breathing, hypotension, and severe anaemia caused by gastroenteritis. He eventually succumbed to severe septic shock.