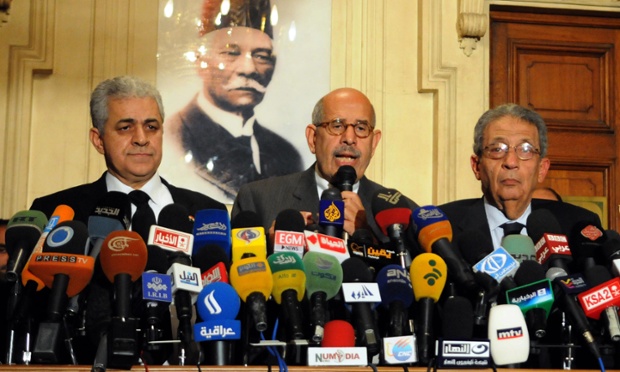 The National Salvation Front (NSF), Egypt’s largest opposition bloc, called on the Egyptian people on Wednesday to join a peaceful protest on Friday 29 March in front of the High Court building.

The protest is to object what they call targeted arrests of activists and revolutionary figures by the regime and using the public prosecution as a tool for settling political scores.

Leaders of the NSF had held a meeting earlier on Wednesday to discuss the current political situation; a press conference was held following the meeting to announce the results.

NSF leader Osama Al-Ghazali Harb said the NSF will hold popular conferences in all Egyptian governorates and support any peaceful revolutionary action that aims to restore the revolution stolen by the Brotherhood.

“The state is run by a failing Brotherhood and a failing president,” Harb said.

He added that the NSF holds the president accountable for anyone who died in any clashes that took place since he came to power.

Harb challenged the president to provide any evidence that an NSF member incited or practiced violence, which the regime has claimed to have happened.

“In solidarity with the media professionals who were physically attacked at the Media Production City and professionally through the regime’s attempts to silence the media… We will hold a joint conference with them to devise ways to protect freedom of the press,” Abdel Ghany said.

He also praised the residents of Moqattam who gathered 14,000 signatures demanding the relocation of the headquarters of the Muslim Brotherhood from their area.

When asked about the Islamists’ recent siege of the Media City, Harb said that the NSF supports any form of peaceful protesting even if it was civil disobedience, “as long as it doesn’t include attacking people and their properties like what happened at the Media Production City”.

The conference began by showing a video about violations committed by Muslim Brotherhood members during protests at the presidential palace in December, Islamists’ siege of the Media Production City and the Supreme Constitutional Court, Moqattam clashes and during various crises like the diesel shortages and increasing bread prices.