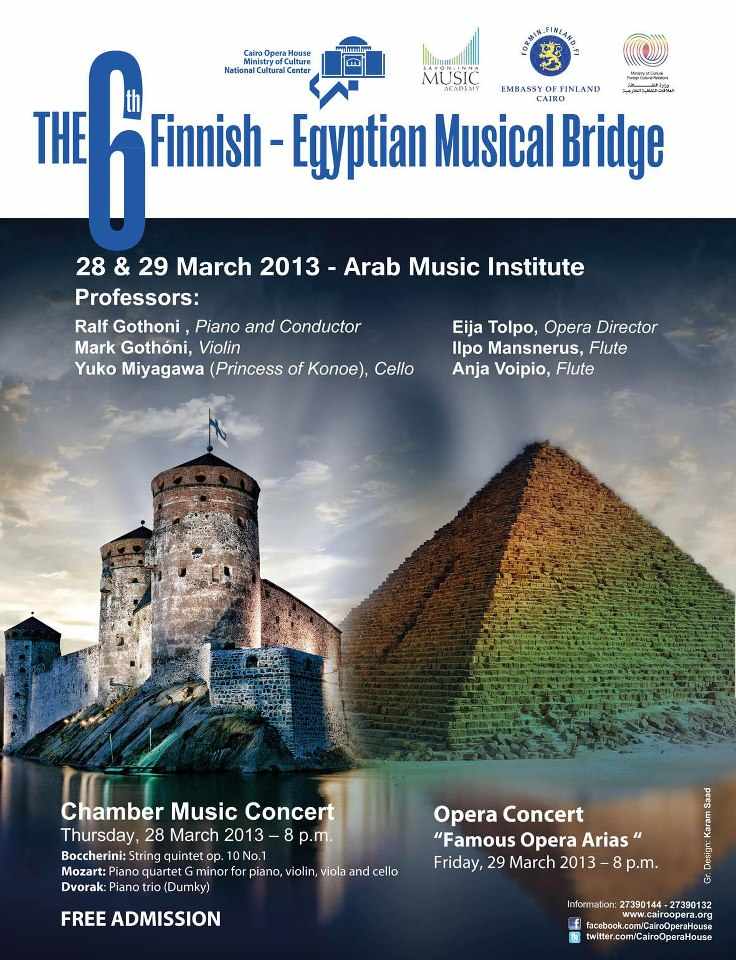 On Thursday 28 March, the Cairo Opera House will be hosting the sixth Egyptian-Finnish Musical Bridge with a chamber music concert in which Egyptian students will play alongside experienced European professors. There will be another concert on Friday 29 March, which will be an opera showcasing the talents of young singers alongside professional European opera singers.

This collaborative event, being held for the sixth time, will also include workshops and masterclasses for talented Egyptian students. We contacted Professor Ralph Gothóni for more information on this musical tradition.

“It was my creation and it began at a concert in Manasterly Palace in 2002 or 2003, where I met a lovely Egyptian who was interested [in continuing the tradition]. There was a good response from the Cairo Opera House and the Finnish Embassy. The first time was in 2005 and the Opera House was very interested to continue [to hold the concerts every year],” Professor Gothóni said.

He seemed very passionate about the musical bridge, particularly the benefits it brings for the participating Egyptian students. “The first year we only had 12 to 15 students, but now we have 100 students,” Professor Gothóni said. “This year, it is the first time we will have players of wind instruments [participating]. There are two professors teaching wind instruments, including the flute which will have 16 students.”

Three subjects will be addressed during the workshops. Firstly, instrumental chamber music, where “instrumental work and how to communicate with each other through music” is discussed. Secondly, “the symbiosis between music and theatre, where young singers are taught to act on stage” and thirdly “working with the orchestra, where professors teach how to conduct music”.

Some talented students will get the opportunity to study abroad. “Every summer, music students go to Finland to continue their studies. The students are chosen from those who participate in the musical bridge. It is a great opportunity for students to progress in their studies,” Professor Gothóni explained. He mentioned Egyptian soprano Gala El Hadidi as a student who once received a summer scholarship abroad.

“One of the goals [of the musical bridge] is to try to teach the students our best knowledge and experiences of European music and transfer that to their countries,” Professor Gothóni said.

He mentioned that two different cultures can find a common ground through music: “Two different countries with different traditions can work together without any problems. The musical language connects everyone without problems.”

Students who participate in the musical bridge are chosen by the Cairo Opera House and the Cairo Music Conservatory. “There are some very lovely voices in Egypt, of a very high quality,” Professor Gothóni said.