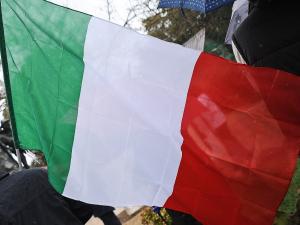 Twenty-five new Italian factories are gearing up to develop operations to Egypt in the coming months, said Hatem Saleh, Egypt’s minister of Industry and Foreign Trade.

He added that Egypt welcomed the move and was “excited to see increased rates of Italian investment in the country, especially considering the economic crisis currently facing Europe”.

Europe’s recent economic recession has led to the closing of a number of Italian factories, which has led a number of businesses to contemplate moving their operations to Egypt, influenced by recent economic incentives provided to companies under the government’s “New factory initiative”.

The announcement came during a meeting between Saleh and Maurizio Massari, Italy’s new ambassador to Egypt.

During the meeting, the two discussed ways to increase cooperation between the two countries and promote joint economic and commercial investment.

Saleh added they spoke about the potential for establishing a joint Egyptian-Italian industrial zone stretching 10m square meters near the city of El-Alamein. The hope is that factories recently closed down in Italy will relocate to the new economic zone, which could expand to host a total of 2,000 new factories.

Saleh further reinforced the need to mobilise the jointly-run Italian Chamber of Commerce in Egypt (ICCE) as a way of improving economic ties between the two countries. He noted that the ICCE was set to meet in Egypt during the second half of the following May, and that during the meeting a memorandum of understanding would be signed between commercial representatives from both countries, in addition to a protocol signed by Egypt’s Industrial Modernisation Centre (IMC), and the Italian Investment Development Authority, aimed at helping Italian factories move their operations to Egypt.

During their meeting, Saleh and Massari also discussed the implementation of the “Green Commercial Corridor”, which would help export Egyptian agricultural products to Italy by increasing the number of shipping lines connecting ports in both countries.

The two further went on to discuss challenges facing Italian investors looking to do business in Egypt, including rising energy costs, shortages of natural gas, and a general lapse in security seen throughout the country.

Saleh reaffirmed that import licences would soon be granted to companies in order to make up for energy shortages.

He added that Italian plans to help redevelop and renovate Egypt’s metro and railway systems were also discussed, in addition to ways to improve worker output and efficiency. These plans primarily included ways to renovate Egypt’s train signals and crossings along the country’s metro lines.

He went on to say that Italy was Egypt’s primary European trading partner, and that there existed vast potential for increased cooperation between the two countries in the transportation, port development, infrastructure and renewable energy sectors.

Massari stated that Egypt was one of Italy’s closest strategic partners in the Middle East and Africa on both political and economic levels, adding that Italian investment in the Middle East remained stable and had even increased slightly since the outbreak of Egypt’s 25 January Revolution. He confirmed that Italian businessmen were looking to increase these levels of investment in the future.

It was added that officials from Egypt’s government were making concerted efforts to address obstacles faced by Italian investors working within the country, saying that a number of such investors did in fact seek to move their factories to Egypt, and remained keen to push for the recruitment of Egyptian workers including for senior positions.