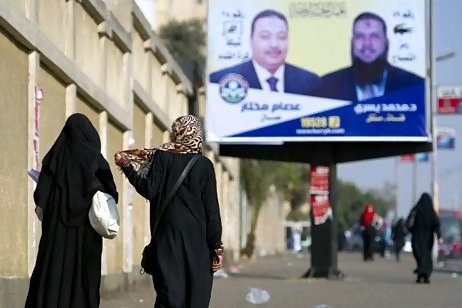 Shura Council members passed nine articles from the political participation bill. The articles govern the right to vote, how Egyptians abroad vote, and membership of the committee running elections.

The council had agreed to the government-drafted bill in principle last week before referring it to its Legislative and Constitutional Affairs Committee for review and amendments.

One of the edits that was voted into law in the Monday session was the addition of General Intelligence Service Directorate staff to the list of people banned from voting in addition to the already banned police and military personnel.

Another passed article included a list of crimes that would mean convicted citizens lose their right to vote. Citizens who are incarcerated due to a mental illness will not be able to vote.

Shura members added a clause permitting the introduction of electronic voting in future elections, although it will not apply to the upcoming parliamentary elections for the House of Representatives.

Parliamentarians debated the legislative committee’s decision to lift a longstanding ban on the use of religious slogans in election campaigns, but had not yet voted on the amendment at the time of print.

The Legislative and Constitutional Affairs Committee voted on Sunday to remove a clause from Article 10 of the law banning religious slogans in campaigning, instead limiting the ban to campaigns that discriminate based on religion, gender, or ethnic origin.

Opposition representatives saw the move as an attempt by the Muslim Brotherhood, whose political wing the Freedom and Justice Party controls a majority of Shura Council seats, to legalise its long-time slogan “Islam is the solution”.

Saleh added that the ban on discrimination should suffice and that religious slogans should not be banned since Article 2 of the constitution, which states that Islam is the state religion and Shari’a is the principle source of legislation, constitutionally protects their usage.

At the time of print Shura Council members had voted the bill’s first nine articles into law and were still debating Article 10.