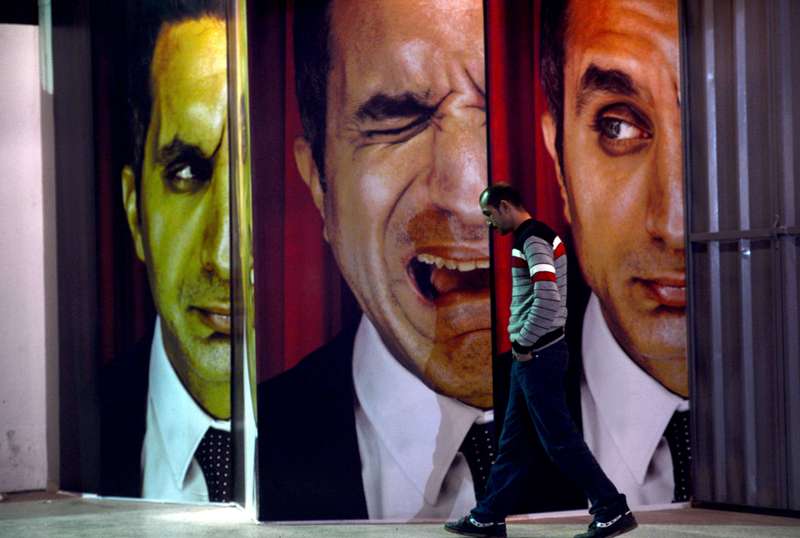 The Investment Authority has threatened to revoke CBC’s licence if the satellite channel does not remove violations in the popular television program Al-Bernameg.

The government body said that if CBC continued to follow the current policies on screening satirist Bassem Youssef’s program, its licence could be revoked.

In a letter to the channel, vice-chairman of the authority Abdel Moneim Al-Alfi said the conditions of granting licences to channels include refraining from broadcasting materials inconsistent with the values, ethics, and principles of society. He added that programs aiming to defame, discredit, or encourage extremism and sedition against institutions would not be tolerated, according to state-owned Al-Ahram.

The US State Department also discussed Youssef’s case on Monday. “We’re concerned that the government of Egypt seems to be investigating these cases while it has been slow or inadequate in investigating attacks on demonstrators outside of the presidential palace in December 2012, or other cases of extreme police brutality… There does not seem to be an even-handed application of justice here,” said the department’s spokesperson Victoria Nuland in a press briefing.

The Muslim Brotherhood’s Freedom and Justice Party (FJP) strongly criticised Nuland’s statements on Tuesday, calling them “audacious”. The FJP called the State Department’s commentary a “blatant interference in the internal affairs of Egypt” and the ongoing legal process.

The FJP also blamed Nuland for overlooking charges against Youssef for contempt of Islam. “This contempt, if true, represents a serious breach of law, customs, and social and cultural constants in Egyptian society,” the Tuesday statement said. The party went on to say that such charges would have “serious repercussions in this sensitive stage,” including offending Egyptians who “reject the taunting of their religion”.

He went on to discuss the allegation that Youssef had insulted religion, playing old video clips of President Mohamed Morsi making anti-Semitic comments before he was elected.

“Without Bassem, all those journalists and bloggers, and brave protesters who took to Tahrir Square to voice dissent, you, President Morsi, would not be in a position to repress them,” said Stewart, then replaying a January interview with the president, who vowed that he would welcome criticism from any Egyptian.

“Democracy isn’t a democracy if it only lasts up until someone makes fun of your hat,” added Stewart, in reference to an episode of Al-Bernameg in which Youssef parodied the hat Morsi wore in Pakistan when receiving an honorary degree.

The Egyptian heart surgeon turned comedian, who has modelled his program after The Daily Show, visited Stewart’s program last June and the two have since remained in contact.

Youssef was also interviewed by CNN’s Christiane Amanpour on Monday night. He said that during his questioning by the public prosecution, he was asked questions about a number of jokes he had made during his show Al-Bernameg, including ones he had made about speeches the president had made, allegedly contributing to damaging the president’s image overseas.

The comedian said he considered the recent crackdown on freedom of speech as a “phase” in post-revolution Egypt. “Now is the time for political Islamic power to step up and show us that they are truly moderate and truly believe in democracy.”

He rejected the current situation as one being a struggle between secularists and Muslims, denying he had done anything to insult Islam, one of the charges he currently faces. “Other people who claim to be the sole representatives of Islam… are the ones actually giving a bad image and insulting [Islam].”

Youssef affirmed that his program would continue its increasingly provocative satirical tone in the face of prosecution. He considered laws that prohibit citizens from insulting the president or any religion to be “ridiculous” and the “foundations of a fascist regime”.

“The problem with the rhetoric of the government and [its] supporting media is that they are blaming the media for talking about the problem instead of solving the problem,” he said. “This is a government that is hanging its failure on other people’s right to free speech.”

“They expect that people will remain silent… but it will not happen, which is why there is unrest,” he added.

Youssef was released on EGP 15,000 bail on Sunday following questioning at the office of the prosecutor general.