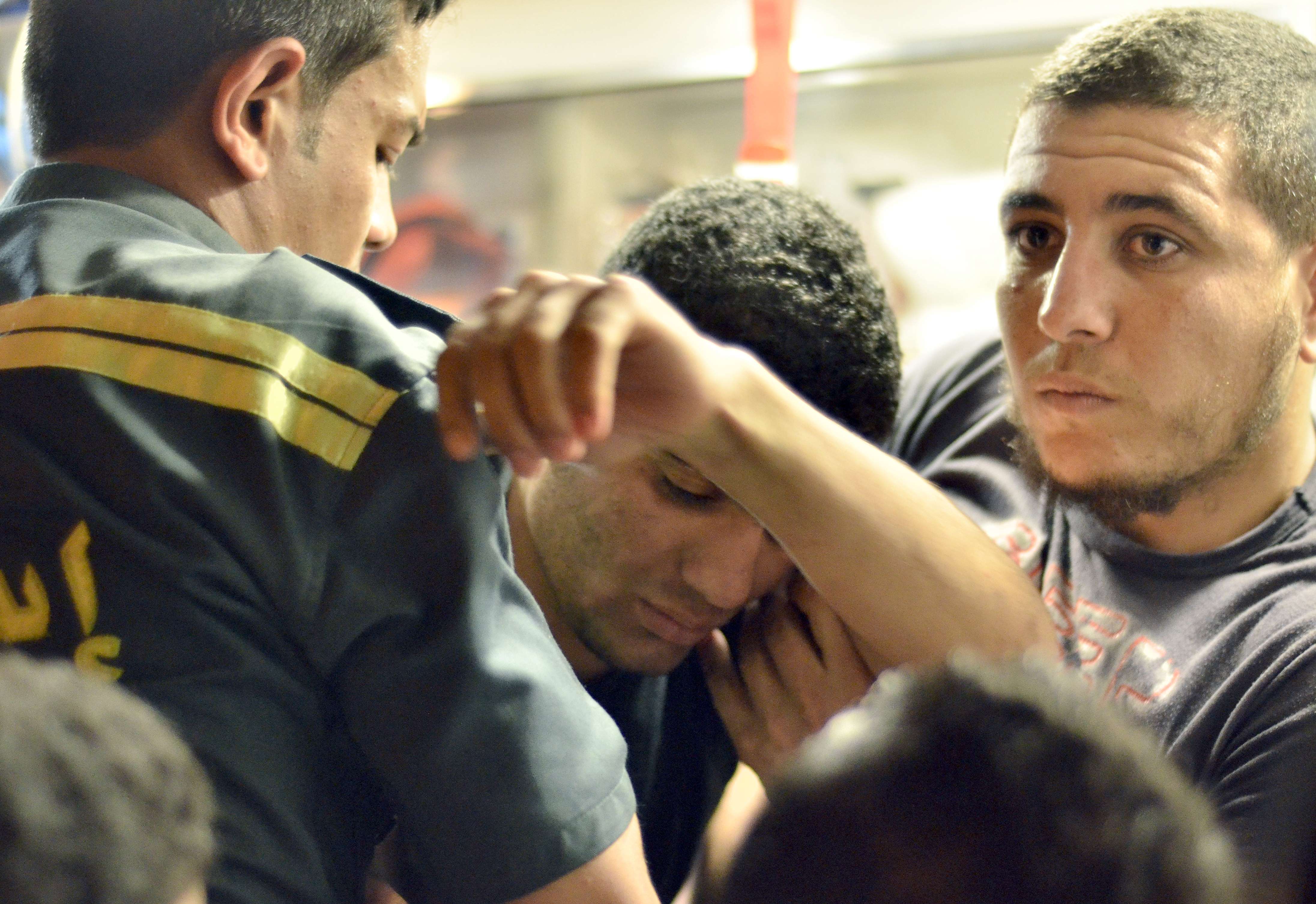 Al-Tayeb referred the matter to the prosecution for investigations. The statement claimed a university vice-president shared the meal in question with students.

President Mohmed Morsi visited some of the Al-Azhar University students in hospital on Tuesday.

At least 580 students fell ill after eating in Al-Azhar’s male student dorms. Most of those who were ill have recovered and the rest are stable and expected to be released by Tuesday night.

Eissa said the students managed to get past the gates of the headquarters. At the time of print, some students were inside the headquarters and were contemplating going upstairs. “Either you come down or we come up,” students chanted to the Grand Imam.

Al-Azhar released a statement on Tuesday saying that there is no reason for the issue to become political, because it is a “passing” incident which has taken place at many other universities.

The statement added that over 24,000 students had eaten meals at the university.

The protest coincides with an emergency meeting between Al-Tayeb and top university officials. He called for a quick investigation and for those responsible to be held accountable.

Quarrels broke out during the protest between students who advocated escalation and students who said that the situation must remain peaceful.

Eissa said if the Al-Tayeb does not respond to their demands to dismiss the head of the university, the students will call for his resignation.

A march from the female student dorms is reportedly on its way to the headquarters.

The head of the Student Union, Ahmed Al-Baqri, also called for the head of the university’s dismissal. Muslim Brotherhood students have dominated the student union of Al-Azhar since elections were held in March. Maysara Abdel-Wahab, the student responsible for the dorms in the student union committee, said on Monday that there had been a marked improvement in the cleanliness and behaviour of dorm workers. He praised the cooperation of university administration and officials.

After the incident, the student union released a statement saying they had thought the situation was improving and were surprised to see a change in the type of food served in one of the male student dorms with a “noticeable deterioration in the quality of the food”.

The union held the university administration responsible for the deterioration of the situation.

Vice-President of the Freedom and Justice Party Essam Al-Erian said problems in the dorms will reoccur in the future if the university officials remain in their posts.

When news of the food poisoning emerged on Monday night students blocked the Autostrad Road and Mostafa Al-Nahas Street.

Al-Azhar University has two dorms, one for its male students and another for its female students. The male students’ dorms are made up of two adjacent dorms. For lunch on Monday, one dorm served chicken, which caused the food poisoning outbreak.

Ambulances entered and exited the dorms on Monday morning to transport the ill students to hospitals.

Last month students from the dorms held protests objecting to the quality of the food served at the dormitories and the poor state of the buildings and facilities. Some female students were assaulted by university employees during the protests, increasing tensions between students and the university administration.

The Egyptian Organisation for Human Rights released a statement condemning the incident as a gross violation of international human rights treaties. Head of the organisation Hafez Abu Se’da described the food poisoning outbreak as a catastrophe and a criminal act, because it violates the right to live. He also called for immediate investigations.

Al-Tayar Al-Shaaby students said in a statement that the food poisoning and the events that followed highlight university negligence and the administration’s disregard for students’ rights and safety.