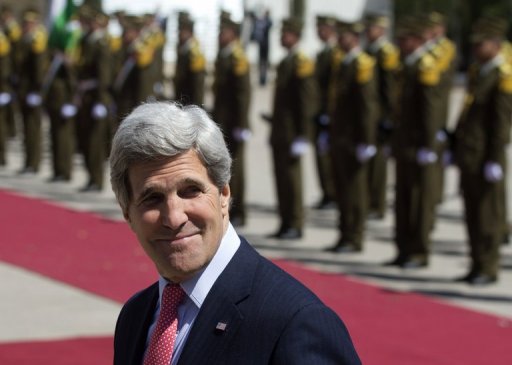 By Jo Biddle (AFP) – WASHINGTON — Secretary of State John Kerry is plunging back into the Middle East with his third trip in a month, foraging for signs that Israel and the Palestinians are ready to make tough sacrifices for peace.

In a surprise move, the State Department announced Wednesday that Kerry will return to Jerusalem and the Palestinian territories early next week to build on a series of talks last month with regional leaders.

Expectations are growing that the US administration is ready to resume some kind of shuttle diplomacy to rekindle the moribund peace process, which has stalled amid bitter recriminations on both sides since 2010.

But State Department spokeswoman Victoria Nuland cautioned: “I would not expect the secretary to be putting down a plan.”

“They’ve had some time to reflect on the visit,” Nuland said. “So this a chance for the secretary to go back and to listen again and to hear what they think is possible.

“But he’ll also be making clear that the parties themselves have to want to get back to the table, that this is a choice that they have to make, and that they’ve also got to recognize, both parties, that compromise and sacrifices are going to have to be made if we’re going to be able to help.”

Kerry will also visit Istanbul this weekend with the two-year-old conflict in Syria which has cost more than 70,000 lives set to top the agenda of talks with senior Turkish officials.

Nuland would not go into details about his talks Sunday in Istanbul, but many of the top Syrian opposition leaders are based there and he may seek to carve out some time to meet them.

Kerry’s latest trip to Turkey also comes after Israel apologized to Ankara in late March for the deaths of nine Turkish activists in a botched raid by Israeli commandos on a Gaza-bound aid ship.

The breakthrough brokered by Obama ended a nearly three-year rift between Israel and Ankara — both key regional US allies.

But Turkish Prime Minister Recep Tayyip Erdogan has said full normalization of ties including the exchange of ambassadors depends on the Jewish state.

Kerry will head to Israel and the Palestinian territories on Monday and Tuesday for separate talks with Netanyahu and Abbas, Nuland said.

The stops have been added to a previously announced trip during which Kerry will also travel to London before heading to Asia for the first time as America’s new secretary of state.

On his first overseas trip since taking up the post, Kerry visited Egypt in early March for talks with President Mohamed Morsi.

Kerry, who took up his post on February 1, has stressed he would like to find a path forward in the peace process which has bogged down for decades.

“I think the stage has been set for the possibilities that the parties can hopefully find a way to negotiations,” Kerry said in Baghdad after meeting Netanyahu and Abbas in what he was was “a good beginning.”

Direct peace talks broke down just weeks after they were started in September 2010 in a bitter row over Israel’s settlement building.

Since then, the Palestinians say they will not return to the table without a settlement freeze while Israel has agreed to resume talks only if there are no such pre-conditions.

According to the Israeli Maariv daily, Kerry is planning to visit Jerusalem and Ramallah “once every two weeks” partly to “resuscitate” the Arab Peace Initiative.

But Nuland shot down the report, saying “there’s been no such calendar set.”

The Arab initiative, put forward in 2002 by Saudi Arabia and endorsed by the Arab League, proposed a normalization of ties with Israel in return for its pullout from all lands occupied during the 1967 Six Day War.