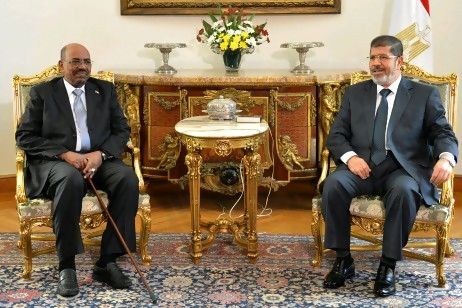 President Mohamed Morsi is scheduled to arrive to Khartoum on Thursday to meet with high level Sudanese officials.

The Egyptian president will meet with his Sudanese counterpart President Omar Al-Bashir as part of the two-day visit.

Presidential Spokesperson Ihab Fahmy said that Al-Bashir and Morsi will speak on Thursday evening in a joint meeting between Egyptian and Sudanese businesspeople and then again on Friday, according to state-owned news agency MENA.

The visit is intended to strengthen bilateral ties between the two countries, especially in the fields of trade and investment.

The Sudanese presidency’s spokesperson Emad Sayyed Ahmed called Morsi’s visit to Sudan “historic” and that it reflects longstanding relations between the two countries. In his press statement he mentioned that Morsi would also meet with leaders of different parties, including Al-Bashir’s National Congress Party (NCP).

During his speech at the 24th Session of the Arab Summit in Doha last week, Morsi said Egypt welcomed a number of agreements that had been signed between Sudan and South Sudan, looking forward to the implementation of those agreements.

Freedom and Justice Party Chairman Saad Al-Katatny led a delegation from his party to Sudan in mid-March in an effort to boost economic cooperation in various sectors of trade. The Egyptian delegation also met with members of the NCP. Al-Katatny also met Al-Bashir and other high level Khartoum government officials.