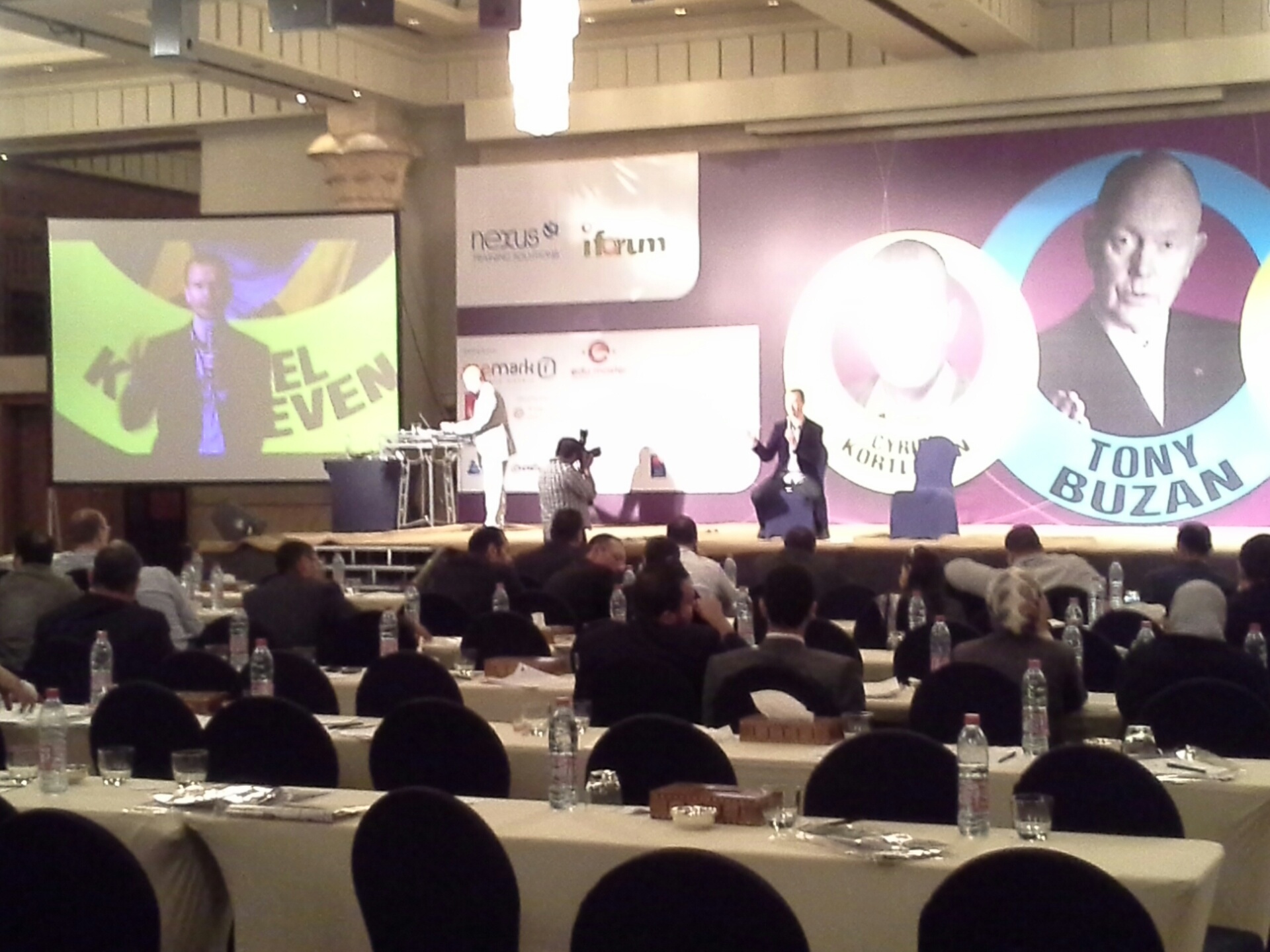 “How to Add Creativity to the Organisation” was the title of a workshop held on Tuesday as part of the “Less Thinking, More Creativity” Tony Buzan conference held in Cairo.

The framework of the workshop focused on the concept of “winning through creativity and innovation”.

Ramon Vullings, the presenter for the session asserted that creativity needs “enough time and a little playfulness”.

Vullings confirmed that a balance must be obtained between the generation of a new idea and the selection of an idea using what he called a “force-field analysis”.

The force field analysis was pioneered by the German-American psychologist Kurt Lewin. It provides a framework for looking at the factors or forces which influence situations, particularly social events, dividing them into ‘helping forces’, which can help achieve a goal, and ‘blocking forces’ which can inhibit progress or hinder a goal.

He said any activity can become creative “when the doer cares about doing it right and better”, and that it was important to reduce risk aversion related with beginning and following through on tasks “because the ability to let go is just as important as being able to generate new ideas”.

Using the force field analysis, ideas can be scattered on a two-dimensional graph, with the horizontal x-axis representing the originality of the idea, and the vertical y-axis, the possibility of achieving it.

The internationally renowned trainer differentiated between risk and recklessness, defining risk as “calculated”, and “recklessness as “a risk with a high probability of going wrong”.

He also praised the value of mistakes in aiding creativity and invention. “There are many kinds of mistakes,” he said. “Preventable, complexity related and intelligent; complexity-related systems emanate from complex systems like the million-line code programme; intelligent mistake come from test and experiment.”

To illustrate the latter, Vullings cited what he called a “Nearling”.

“A ‘nearling’ is something new that you did with the right intention, but which has not yet led to the right result,” he explained. “Until this moment there was no right English word for this phenomenon; there is the word ‘failure’, yet that sounded negative.

“You can recognise a nearling when you look back at what you did,” he said. “You can always learn from a nearling.”

The concept of the nearling, he continued, “fills a gap in the international innovation language”.

Vullings added: “You can be proud of a nearling, because you started an initiative; you may have moved others, maybe it led to something that was successful; you need many nearlings for a few successes.”

To illustrate examples, Vullings mentioned the top ten simple mistakes in history, one of which lead to the creation of artificial sweetner: “The scientist working on an anti-fever medication put his cigarette down in the powder and discovered the sweet taste of the resulting substance.”

“Sometimes bad decisions make great stories,” he said. “So we have to replace fear of the unknown with curiosity.”

Vullings concluded that “creativity without vision can be disastrous while creativity multiplied by vision equals impact”.