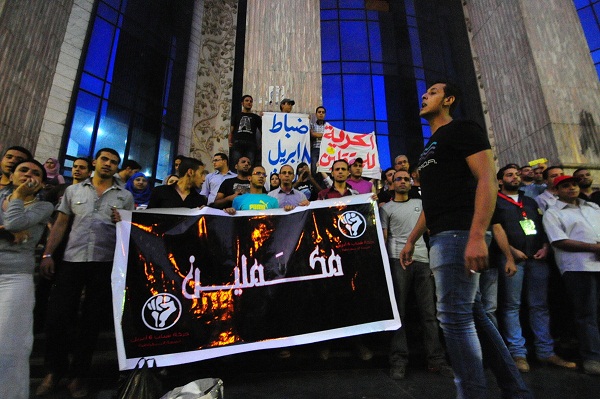 The 6 April Youth Movement announced on Thursday that it will be holding four marches at noon on Saturday.

The marches will start at Shubra, Mostafa Mahmoud, Sayeda Zeinab and Imbaba areas in Cairo. The movement has dubbed Saturday as a “Day of Rage” but only announced the details on Thursday. The marches will be in objection to Egypt’s current political and economic conditions.

A statement released by 6 April in March said the movement will be objecting to corruption, poverty, unemployment, and rising prices.

Coordinator of the movement Ahmed Maher said in a press conference that the Ministry of Interior is still using the same practices it used in the era of ousted President Hosni Mubarak. He said the practices include arresting activists and torturing others.

The prosecution renewed the detention of four members of the movement for 15 days on Wednesday. They were arrested while protesting outside Minister of Interior Mohamed Ibrahim’s house. The movement members threw undergarments at his house, a symbol that the ministry is a prostitute of any regime that rules the country.

Another member of the youth movement was arrested Wednesday for painting graffiti.

The group’s March statement said: “It is time to say ‘enough, Morsi, you violated all your vows’.” The group also held protests outside the house of President Mohamed Morsi on 22 March.

Maher said in the Thursday conference that the return of the military to power is rejected and that this will be fought by the youth movement with all other revolutionary movements.

Haytham Al-Shawaf who represented the Coalition of Revolutionary Movements said a unified vision and principles of what happens after the regime is toppled will be ready in a few days. The coalition said it will be taking part in the Shubra and Sayeda Zeinab marches on Saturday.

The Al-Dostour Party called on its members and the general public to take part in the activities planned for Saturday. The party said this day is a significant mark in the history of resistance in Egypt.

The youth movement had called for a general strike in the city of Mahalla in the Nile Delta on 6 April, 2008. Workers in the Misr Spinning and Weaving Company took part in the strike and the calls for labour reform quickly turned into calls for a nationwide strike.

Today, a number of groups have emerged from the movement including the 6 April Democratic, Revolutionary and Independent fronts.