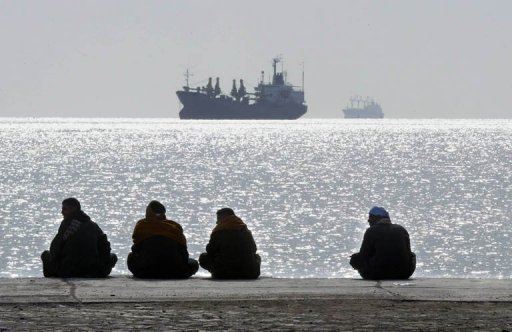 AFP – JERUSALEM: Israel’s government on Friday strenuously denied it had any link to an arms-laden ship that Egypt said its navy seized as it sailed from the Israeli port of Eilat to Togo in West Africa.

“Nobody in Israel knows anything about this ship. It’s clear that it did not come from Eilat or any other Israeli port,” foreign ministry spokesman Yigal Palmor told AFP.

“We cannot understand why anyone should tell stories which can easily be proved to have no basis in fact.”

Egyptian security officials said on Thursday that the navy intercepted the vessel and detained its crew who had set off from the Red Sea port of Eilat en route to Togo.

Officials said that the ship, “which was flying the flag of an African country,” was intercepted after it strayed into Egyptian territorial waters.

The vessel with a crew of 14 and a cargo of 105 crates of unspecified weapons and ammunition, belonged to an African security company, the officials said.

The military’s spokesman Colonel Ahmed Mohamed Ali said on his Facebook page that it belonged to a firm that secures maritime routes in the Red Sea, a haven of Somalia-based pirates.

“The weapons and ammunition on this ship are related to its work and mission to secure commercial vessels,” he said.

But Israel’s Channel 10 television contradicted the Egyptian military’s version, reporting that the boat was carrying 40 tonnes of Iranian weapons destined for Syria or the Palestinian Gaza Strip.

In his statement, Ali did not say whether the ship was released, but security officials had said it would be held while authorities investigate whether it was carrying smuggled weapons.