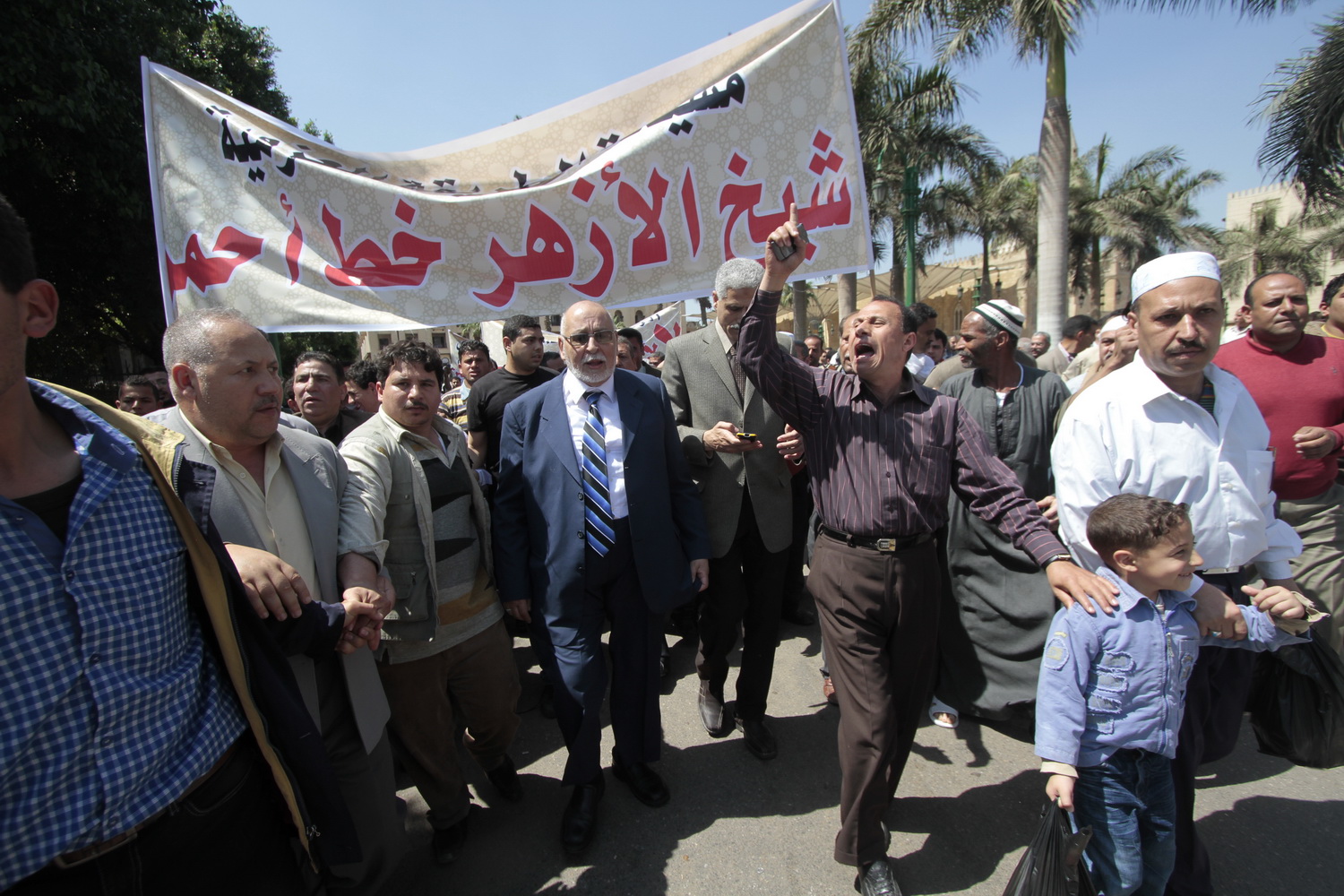 On Friday, Sufi groups, political parties and revolutionary groups and movements organized a number of marches and demonstrations in the governorates of Cairo, Qena, Daqahleya and Luxor in support of the Al-Azhar Grand Imam Ahmed Al-Tayeb.

Abdalla Helmy, the secretary general of the Sufi Groups Union, stated that about a thousand demonstrators from Sufi groups, Al-Azhar students, political parties and revolutionary groups led a demonstration from the Al-Hussein mosque after Friday prayers.

The demonstration moved towards the Grand Imam’s office in the Al-Darassah neighbourhood. The demonstrators chanted against the control of Al-Azhar by any one political group, repeating slogans such as “Al-Azhar is a red line”.

“We support Al-Azhar’s Grand Imam, the university and the mosque. That’s why we demonstrated to show respect and support for the Grand Imam,” Helmy said.

“We condemn the attempt at destroying the reputation of the Grand Imam, which some students initiated after the poisoning incident,” Helmy added, in reference to the poisoning of more than 500 students at Al-Azhar University on 2 April.

Another demonstration marched from Tahrir to Al-Azhar’s Grand Imam’s office in Al-Darassah.

According to state-owned Al-Ahram, hundreds of demonstrators marched in Mansoura protesting against intervention in Al-Azhar’s affairs. A similar demonstration took place in Qena with the support of the representatives of the Orthodox, Catholic and Evangelic churches.

In Luxor, demonstrators took to the streets in support of Al-Tayeb, a native of the city.

Ahmed Gibbril, the coordinator of the Al-Tayar Al-Shaaby in Luxor, said that around 6,000 demonstrators marched in Luxor after the Friday prayers to protest against what he described as efforts by the regime to control Al-Azhar.

“This is one of the biggest demonstrations to occur in Luxor, but we had to defend Al-Azhar, the symbol of moderate Islam and the keeper of the Egyptian identity, against attempts at politicisation. Al-Azhar should remain independent and impartial,” he said.

A statement by the Al-Dostour Party, issued on Friday, accused the Muslim Brotherhood of plotting the poisoning incident in an attempt to take over Al-Azhar. Several of the protesting students called for the removal of the Grand Imam.

According to Al-Ahram, opposition leaders such as Hamdeen Sabahy and Abdel Moneim Aboul Fetouh released statements condemning the attempt to interfere in the Grand Imam’s office and praising the steps Al-Azhar has taken to contain the crisis.

“The Grand Imam of Al-Azhar thanks all Egyptians, Muslims and Christians who expressed their love and respect for Al-Ahzar and calls upon everyone to work hard to turn supportive demonstrations and marches into cooperation and unity to achieve stability, progress and leadership,” read a statement released by Al-Azhar on Friday.