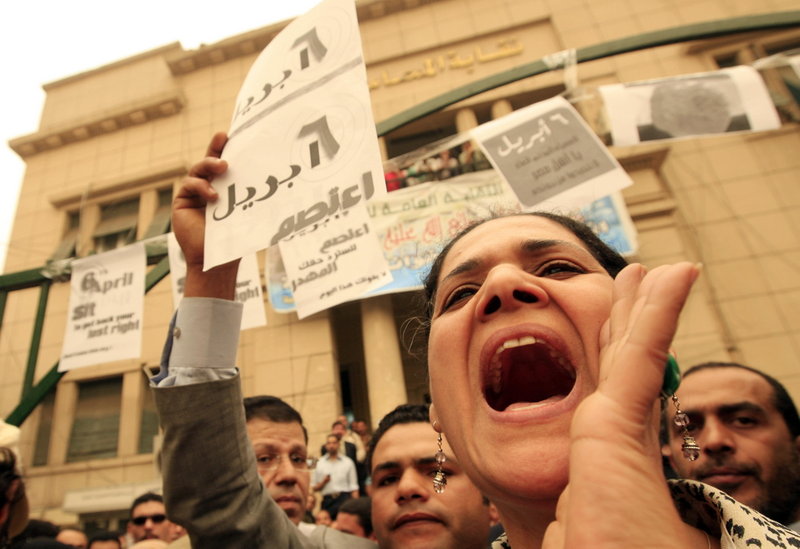 Opposition parties and groups will march on Saturday to mark the anniversary of the 6 April general strike in Mahalla in 2008. Marches are planned to take place around the country, headed by the 6 April Youth Movement.

Members of Al-Dostour Party, Al-Tayar Al-Shaaby, the Free Egyptians Party, the Revolutionary Socialist Party and the Free Front for Peaceful Change will join the marches.

In Cairo the 6 April Youth Movement announced that its members will march from Shubra, Sayeda Zeinab, Imbaba and Mostafa Mahmoud mosque. The group has not announced the destination of the marches. Sources within the movement have named various possible destinations, including Maspero, the High Court, and the Shura Council.

Members of the 6 April Democratic Front began to assemble in central Cairo on Saturday morning. The front arranged buses to transport its members to Mahalla to mark the anniversary.

Spokesperson for the Youth Movement Khaled El Masry reported that marches are planned for Mahalla, Alexandria, Marsa Matruh, Minya, Sharqeya and Port Said. He also reported that members in Paris will protest outside the Egyptian embassy and there are plans for protests in the United States.

Hazem Helal, head of political marketing for the youth division, confirmed that his party will be marching with the 6 April Youth Movement from Shubra and Mostafa Mahmoud mosque. “We are just as angry with the situation in Egypt as the 6 April groups so we will march together,” Helal said.

The chairman of the Freedom and Justice Party, Mohamed Saad Al-Katatni, said on Saturday: “We cannot deny the role played by national patriotic movements, such as 6 April, Kefaya and the National Association for Change, in preparing for the glorious 25 January Revolution.” He said that these groups, and the Muslim Brotherhood “fought tyranny together for years” against the regime of former president Hosni Mubarak.

Looking to the future Al-Katatni said: “I hope we can regain that true and wonderful spirit of selfless giving and cooperation, ignoring partisan or ideological differences to take part in building a modern democratic state.”

Security forces increased protection of a number of buildings that could potentially be targeted by protesters on Saturday. State-owned news agency MENA reported that there will be a heavier than usual security presence at the Ministry of Interior, the High Court, on Kasr El-Aini Street, and at the parliament building.

The youth movement called for a general strike in Mahalla in the Nile Delta on 6 April 2008. Workers from the Misr Spinning and Weaving Company took part in the strike and calls for labour reform quickly became calls for a nationwide strike.

Today, a number of groups have emerged from the movement including the 6 April Democratic, Revolutionary and Independent fronts.