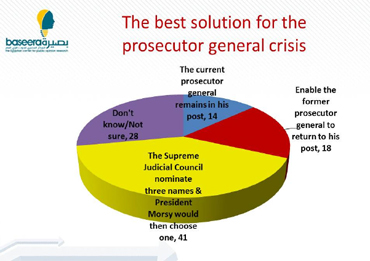 Egyptians have continued to show dissatisfaction with President Mohamed Morsy’s job approval rating, which has hit a record low, with only 47 percent of Egyptians saying they think he has performed well, the latest public opinion poll conducted by The Egyptian Center for Public Opinion Research (Baseera) has revealed

This approval rating is less than the percentage Morsy earned at the end of his first eight months in office, during which he was seen by 49 percent of the population as performing well, and much far behind the percentage he earned after the first hundred days, after which 78 percent of respondents said they approved of his performance.

According to the periodic poll by Baseera, which comes nine months after Morsy was sworn into office, the percentage of those disapprove of his performance rose to 45 percent, compared with 43 percent at the end of his first eight months in office, and only 15 percent after his first hundred days in office. Around 8 percent of respondents were unable to judge the president’s performance.

The percentage of respondents who would vote for Morsy if presidential elections would be held tomorrow reached 37 percent, compared with 35 percent at the end of his eighth month in office, and 58 percent after the first hundred days.

Three percent of the respondents choose Hamdeen Sabahi, the dark horse in the last presidential race. Also, three percent said that they favored a military man whether he was General Abdel Fattah al-Sisi, the country’s defense minister, or any person from the army.

According to the poll, a third of Egyptians have never heard of the National Salvation Front (NSF), the country’s main opposition coalition. This percentage was almost the same in last month’s opinion poll.

Furthermore, 39 percent of Egyptians have also never heard of the appeal court’s decision on 27 March to reinstate Abdel Maguid Mahmoud, the former prosecutor general, and cancel the appointment of the current chief prosecutor, Talaat Abd Allah.

Forty-one percent of the respondents see that the best solution is for the Supreme Judicial Council, Egypt’s highest judicial authority, to nominate three names, after which President Morsy would then choose one as prosecutor general, as the constitution indicates. Eighteen percent, however, see that the solution is to enable Mahmoud to return to his post. Only 14 percent favor the current chief prosecutor remaining in his post. The remaining percentage said that they can’t think of a solution to this crisis.

The poll was conducted using landline and mobile telephones, with a sample size of 2,202 respondents ages 18 or older nationwide. All interviews were conducted on Wednesday and Thursday, 27 and 28 March 2013. The response rate was approximately 73 percent, and the margin of error was less than 3 percent. Income brackets were determined based on ownership of durable goods. For more information on the detailed findings and the methodology adopted, or to see the graphic presentation of results, please consult our website: www.baseera.com.eg