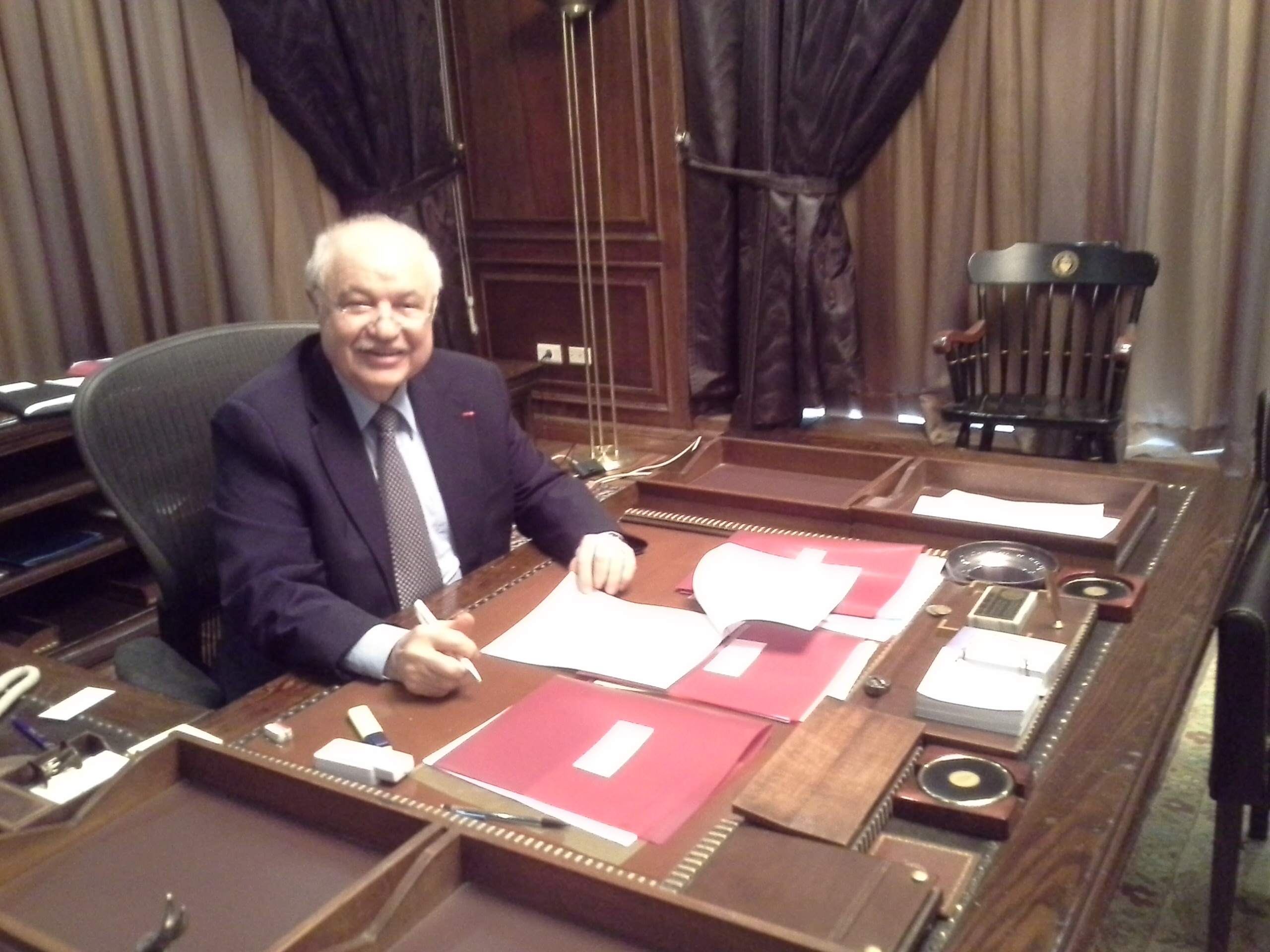 Daily News Egypt sat down with Talal Abu Ghazaleh to discuss his organisation, education, and prospects for the region in the post-Arab Spring age.

Would you please tell us about your company’s activities?

The Talal Abu-Ghazaleh Organisation (TAG) is a multidisciplinary group providing a variety of services such as capacity building in the private and public sector in the fields of accounting, and information technology management and education. We are also the largest intellectual property firm in the world and we have online education programmes.

There’s a Tsunami hitting the region that will reshape the whole world, especially educational practices. The country and region still think of education in a traditional way like the old Kottab (traditional schools for learning the Arabic and the Qur’an); they are not using modern techniques.

Now there is a new generation; they are natives of the new world, and we are the immigrants. They are born with the IT knowledge and skills, while their countries do not recognise online education; they adopt the one teacher-one class concept in an age where knowledge doubles every month. In this age you can’t compete with traditional classes; you have to give students the opportunity to go online.

In Egypt there are approximately 20 million students. If you want them to go to school, you have to provide classes, teachers, books. On the other hand, the new schooling system represented in online education will soon lead to the death of universities.

What do you mean exactly by “Tsunami”?

The Tsunami I am referring to is a powerful rapidly-moving knowledge revolution. There’s an American report stating that 80% of all education will become virtual by 2020. We must be prepared to harness this Tsunami.

I’m worried about channelling funds to building schools, and building larger campuses; there is a crisis in funding. Another aspect that worries me is that you don’t see a student reading a book on the campus and universities in the Arab world don’t have digital libraries.

Universities brag about their students having to take IT skills tests before they graduate, but I consider this an insult: students should take that test at entry level.

Bill gates dropped out of school when he realised that he can learn more on his own; that’s an indicator of how the world is moving.

Countries can block access to certain websites. This must be governed by an agreement. Also, major traders on the internet generate revenues without making people pay; it is the advertisers who pay. That is a different business model that requires new trade agreements.

These reforms were met by a lot of debate and resistance to change.

How can your organisation positively affect Egyptian society?

That was the purpose of my visit to Egypt. I met the ministers of higher education and scientific research two days ago, and I will meet the minister of communications and information technology on Sunday.

I was impressed with their academic background and their positive orientation. They are high quality technocrats with no political affiliation. During the discussion they showed readiness to lay in Egypt the foundation of a knowledge revolution.

As a chairman at the Arab States Research and Education Network (ASREN), I discussed with them a number of projects aiming to develop Arab digital infrastructures and linking them with similar networks in different parts of the world.

We also discussed how to make Egypt a hub in the Arab region by opening centres for research using ICT capacities in order to create a marketplace for research in the country.

TAG has constructed the first privately-owned computer cloud in the Arab region. It will be dedicated to education, and we want to host it in Cairo. Studies show that the cheapest connectivity point in the region is in Egypt.

The project is finalised and we want it to be launched before year’s end. It will give Egypt infrastructure leadership and research opportunities.

Also we discussed the launch of the TAG-Cambridge ICT Skill Award in Egypt. We created this programme in cooperation with the University of Cambridge’s examination centre. It is applied in nearly every country except in Egypt because the International Computer Driving Licence (ICDL) had a monopoly on ICT testing and granting certificates. Now we have moved on to a freer market where there is competition, and hence better quality.

The programme is also scheduled to be launched before year’s end through opening a number of centres to serve people hoping to acquire ICT skills.

How do you see the situation in Egypt after the Arab Spring?

Some people see the change as the end of a process. I disagree and see it as the beginning of a process. I see renaissance and not just spring, because spring is just a season but renaissance is more durable and it doesn’t come in days or years, it can take decades.

In this knowledge era I expect it will take a 10 year transition to a mature economy. Over the years, a collective consciousness will develop enabling society to decide what economic models it wants to adopt.

Change is a painful process; it creates conflicts in order to agree on the vision of the country. However, we shouldn’t be pessimistic; change cannot come like a switch.

There are two things that make me optimistic: first, the International Monetary Fund (IMF) says the future belongs to larger populations, and in this era knowledge creation is a source of wealth creation, and a large population of qualified individuals means more production.

The second thing is that Egypt has managed to destroy the only order of organised corruption that manifests in monopoly. Corruption is not only when you steal or take bribes, and monopoly also kills the economy, as there can’t be transparency under monopolistic systems.

The old regime was responsible for running and managing monopolies. By destroying monopolies we are entering into a free economy; but it takes time to build a new building, give equal opportunities and inspire productivity.