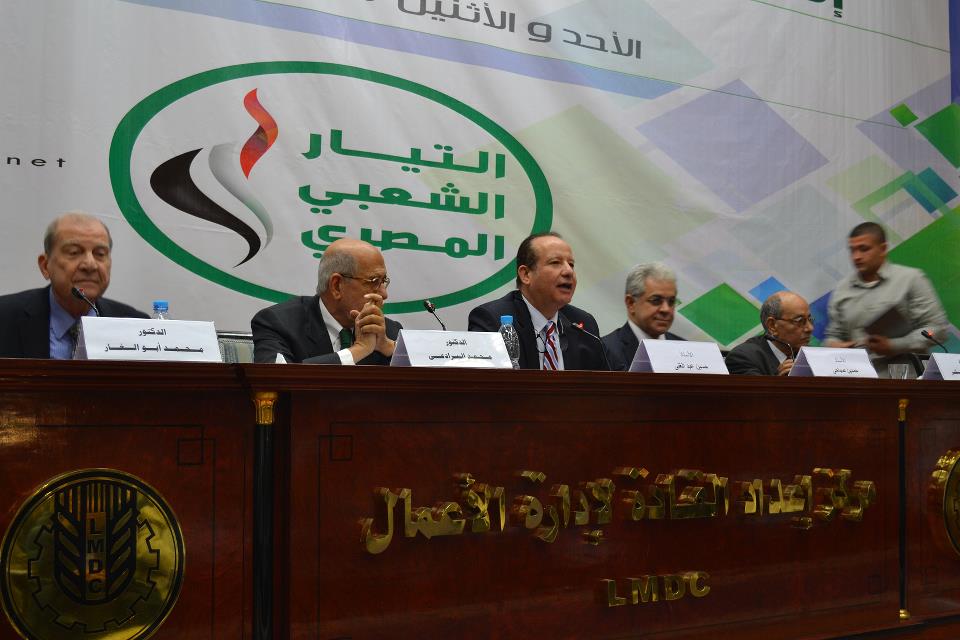 Al-Tayar Al-Sha’aby Party held the second day of its conference on Monday, “Saving the Egyptian economy, towards an alternative programme”.

The second day of the conference was attended by leader of the Party Hamdeen Sabahy, Mohamed ElBaradei and Mohamed Hassanein Heikal.

“The conference today totally refuses the current state of the country under the shadow of Qandil’s government, which has been raising prices of most products,” said Hussien Abdel Ghani, member of Al-Tayar Al-Sha’aby party.

“Because there are currently no suitable economic strategies from the government, the party is offering an alternative model in the interests of Egyptian citizens,” he said.

He also said that the Party “condemns the International Monetary Fund (IMF) loan” and “its humiliating terms which will threaten the coming generations with mountains of debt”.

“There are other alternatives to increase revenues,” he added. “By amending the general budget, for example, and through resources and increasing domestic revenues.”

He continued: “First, the most suitable economic system should be a mixed one, which embeds the private sector as part of a general funding strategy, as this independent model can do better than the models of the ousted Mubarak regime or even Morsi’s current one, who really follows in the previous regime’s footsteps.”

“Secondly, social justice should take place, because it plays a great role in achieving peace in society. This justice will take place through many phases. One of which is removing any discrimination against women in the workplace,” he continued.

He said a just system for wages would set the minimum wage at EGP 1,500 per month and the maximum at 15 to 20 times this number, in order to guarantee a good life for Egyptian citizens.

“Extra incentives should not exceed an individual’s fixed wage by such a huge amount,” he continued. “Moreover the minimum for pensions should be the same as the minimum wage for workers’ salaries.”

Abdel Ghany also said that social justice will be achieved only through a fair distribution of energy subsidies, by increasing subsidies themselves and effecting tax exemption for the poor and those with low incomes.

He added that the Party’s model aims to support the healthcare sector, especially since the government spends only 1.6% of state revenues on the sector, whereas in other countries in the region this can be as high as 3%, or 5% in countries outside the middle east.

“We also advocate 5.2% of GDP to be spent on the education sector, in order to develop education in the country, and increase the wages of workers employed in the sector and cancel private lessons,” he said.

“The Central Auditing Organisation should be the only watchdog here, and no other body should monitor it, in order to combat corruption,” he said.

He added that the Party’s new model also aims for an agreement on banking and loans, and to stabilise the price of Egyptian pound.

The Party also pointed to the importance of the Suez Canal as a trade transit, as well as the need to focus on mineral resources and their importance to the national economy. They also recommended the use of solar energy as an alternative energy source.

“Egypt is now witnessing the most severe lack of conscience in its history, on behalf of the authorities and their media,” said Abdel Ghafar Shokr, the founder of the Popular Alliance Party, who also attended the conference.