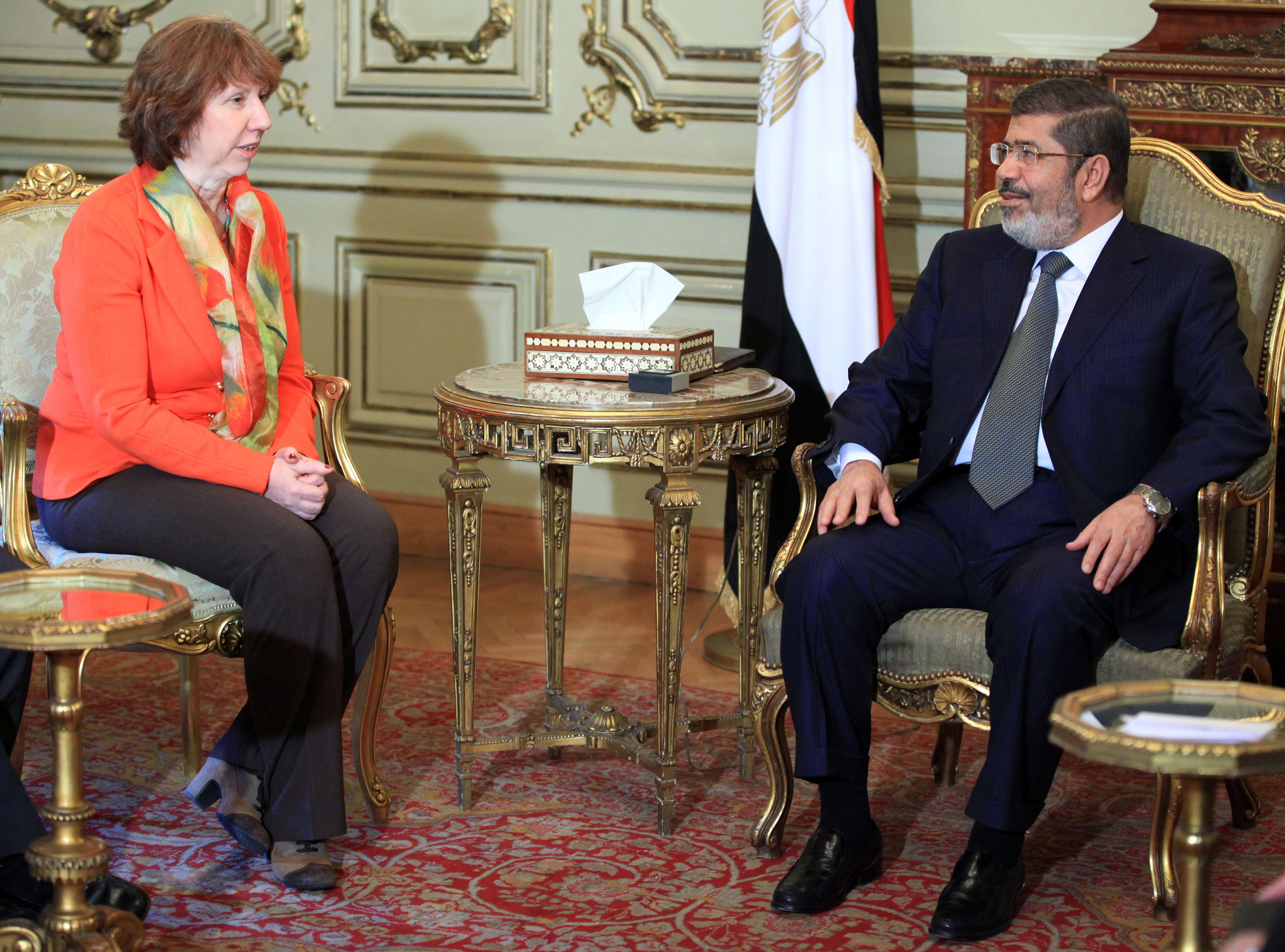 President Mohamed Morsi met with EU High Representative of the Union for Foreign Affairs and Security Policy Catherine Ashton on Sunday to tackle the mounting political and economic issues in the country.

“I will work hard in Cairo to engage with all parties to help build confidence and find common ground on both political and economic issues,” Ashton said in an official statement.

During the meeting, Morsi underlined the important role of the EU in supporting Egypt, and said that there was more room for the European side to support the country’s democratic transition.

“We really don’t have any details on the meetings other than what was published regarding Ashton’s take on the Abbaseya events,” said the EU Delegation’s press office in Egypt.

Ashton stated that this is a critical time for Egypt’s transition, in the midst of the country’s “huge economic and political challenges”.

“More than ever, Europe, as a partner and neighbour, has to support Egypt in its move towards deep and inclusive democracy,” she added.

Ashton also made remarks on the violent attacks that took place at the Abbaseya Coptic Cathedral in Cairo, expressing that she is “worried” about the situation.

“On hearing the news I immediately contacted the presidency, strongly urging restraint and for the security forces to control the situation,” she said.

“I understand the president has spoken with the head of the Coptic Church and has condemned the violence,” she added. “My thoughts are with the victims and their families.”

Ashton’s visit represents part of the EU’s “ongoing efforts to support democratic and economic transition in Egypt”, a statement read on the website of the Delegation of the EU.

Her visit comes as Egypt is struggling to secure a $4.8bn loan as delayed negotiations with the International Monetary Fund (IMF) continue.

Egypt is also struggling with its foreign currency reserves which some analysts believe have dwindled to be able to cover less than three months’ imports.

The country also faces devaluation of the Egyptian pound against the US Dollar and warnings of power cuts and fuel shortages over the summer.

The United States has also directed sharp criticism at the Islamist-led government, citing a “disturbing trend of growing restrictions on freedom of expression”.

The European Parliament, in a non-binding resolution, urged the EU in March to “not grant any budgetary support to the Egyptian authorities if no major progress is made regarding respect for human rights and freedoms, democratic governance and the rule of law”.

The EU warned Egypt that it could lose funds from the €5.6bn package, unless progress is made in the fields of human rights, freedom of speech and protection of minorities, especially Copts and women.