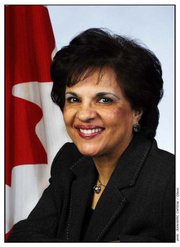 By: The Honourable Mobina Jaffer

A Brief Overview the Situation in Mali

Since the beginning of January 2012, an insurgent group has been fighting with the Mali government for the independence of northern Mali, an area known as Azawad. This group, formally known as National Movement for the Liberation of Azawad (MNLA) and also referred to as Tuareg nationalists, joined forces with Islamist rebels.  By using their combined forces, they gained control of northern Mali in the spring 2012. Consequently, Toureg nationalists have gained independence of Azawad. However, due to conflicting visions with the Islamist rebels, Tuareg nationalists renounced their claim and left the rebels to rule over northern Mali.

In December, the United Nations Security Council passed Resolution 2085, which stresses the need to refine military planning and describes the steps to be taken before an international military intervention in Mali. However, the rebel capture of Konna on 10 January prompted a proactive military intervention by France. At the beginning of the military intervention, France was also supported by African countries. United Kingdom, Denmark, Belgium and Canada provided transport and cargo planes. And America focused on communications support.

Currently, French forces are reported to be engaged in heavy fighting in northern Mali. Thus far the intervention has cost France around $133 million. For its part, UN is appealing for $373 million in foreign aid. However, more than just a contribution of financial aid needs to be done in order to deal specifically with the impact that this conflict has on Malian women.

The Islamist rebels consist of three main groups:  Ansar Dine, Jihad in West Africa (MUJAO) and al-Qaeda in the Islamic Maghreb (AQUIM). They want to impose a hard-line form of Shari’a in Mali. The three Islamist groups do not have concrete or strong ties to each other, but they are united in their aim to spread the Saudi-inspired Wahhabi/Salafi sect of Islam.

While in control of Northern Mali, the groups used intimidation and fear tactics in order to promote their religious beliefs. They amputated limps of people accused of crime and destroyed Sufi shrines. They used sexual violence in order to spread fear across the population. Additionally, the rebels targeted females who work, for disobeying their “laws”, because under the strict application of Islamic Shari’a law women cannot work.

Saran Keïta Diakité, the President of the Malian branch of the Réseau paix et Sécurités des Femmes, an organisation that belongs to the Economic Community of West African States (ECOWAS), notes that extremist groups are applying their own version of Shari’a law: “They cut off people arms and beat up women who have had sex outside marriage … while they themselves are raping girls and women and are forcing girls to marry. The first night, [the bride] is forced to have sex with five to six men. It’s not Shari’a.”

In January 2013, the Office of the United Nations High Commissioner for Human Rights released a report on the situation of human rights in Mali, which covers the period from 17 January to 20 November of 2012. Although it discusses many different human rights violations, it stresses that women in particular have suffered due to an extreme interpretation of Shari’a law by the Islamist rebels. The report cites cases of harassment, abuses and sexual violence due to accusations of being improperly veiled or dressed, or for riding a motorbike.

The Impact of Resolution 1325 on the Lives of Malian Women

The impact of Resolution 1325 and its practical applications on women in conflict zones still depends largely on the willingness of commitment of dedicated individuals and Malian women have demonstrated a strong desire to participate in the decision-making processes. However, the president of the Malian Women’s Rights and Citizenship group Nana Sissako Traore states that “women are being left out of the process.”

Sadly, this is not surprising. Of the 14 peace negotiations co-led by the UN in 2011, only four had delegations that included a woman. In November 2012 however, the UN Under-Secretary-General and UN Women Executive Director Michelle Bachelet noted at the Open Debate of Security Council on Women and Peace and Security that “in spite of their absence from official conflict resolution processes, [Malian] women leaders in the North are using informal channels to call on the leaders of armed groups to participate in peace dialogues.”

Using Resolution 1325, Malian women must demand from their government “equal participation and full involvement” and “increased representation of women at all decision making levels.” When programs for post-conflict reconstruction are created, women can ask for an equal number of women and men in these programs. There is still a significant need for a greater amount of women in decision-making roles in Mali.

Furthermore, Resolution 1325 goes on to recognise “the urgent need to mainstream a gender perspective into peacekeeping operations.” If Mali were to have a large female peacekeeping force, it may encourage the local Malian women to participate in the national armed forces. This would transform the way national armed forces interact with victimised women and ensure that the forces are part of the solution, rather than the problem. Moreover, women and children are more comfortable with reporting the abuse to women in peacekeeping missions, which means UN would have a continuous grasp of the actual situation on the ground.

Lastly, article 8 part A of Resolution 1325 draws attention to “the special needs of women and girls during repatriation and resettlement and for rehabilitation, reintegration and post conflict reconstruction.” The government and international community should provide resettling assistance to Malian working women who were driven out from their home cities due to the rebel’s beliefs that women are not allowed to work.

Senator Mobina Jaffer represents the province of British Columbia in the Senate of Canada, where she chairs the Standing Senate Committee on Human Rights. Senator Jaffer is the first Muslim senator, the first African-born senator, and the first senator of South Asian descent