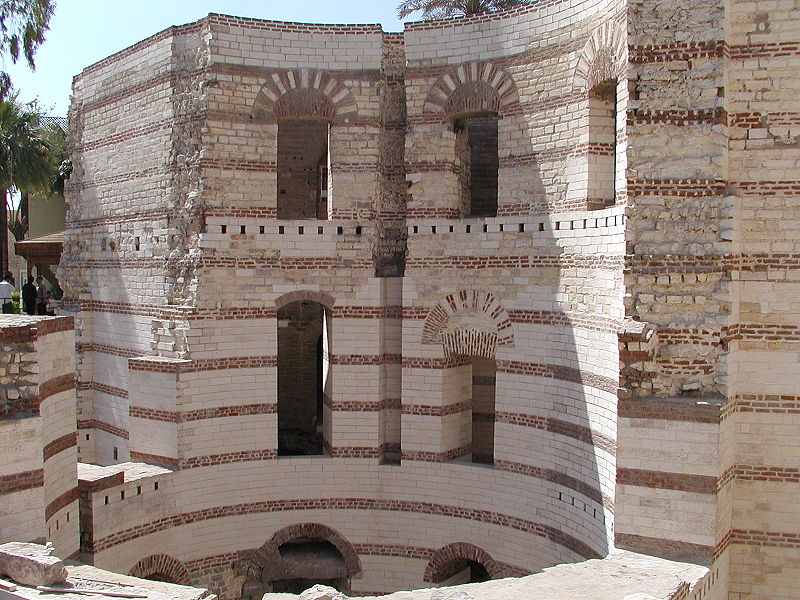 The remnants of Fort Babylon, a colossal round building located near the Coptic Museum and the Greek Orthodox St. George Church, are often overlooked by tourists and neglected by tour guides when they visit the old Coptic area of Cairo.

The fort was built by the Romans northeast of the old capital Memphis and overlooked the Nile, meant to secure transportation along the river between Upper and Lower Egypt. In the present day there is little left of its former glory.

The fort was built on the southern end of the old Pharaonic town Per-Hapi-On, or ‘The river house of On’. According to some historians the mispronunciation of the name by the Romans led to the name Fort Babylon but others claim it was named after a number of captives brought there from Babylonia during the time of Sesostris.

Roman Emperor Diocletian built the fort in 300 C.E. as the stronghold of three legions in charge of securing Egypt. The garrison of Fort Babylon vowed to secure ships on the Nile and a canal that passed through the town connecting the Nile with the Red Sea. This canal was first established by the Pharaohs, and was restored and enlarged by the Roman Emperor Trajan. The fort was renovated and fortified by the Roman Emperor Arcadius.

The harbour flourished, hosting ships from the Red and Mediterranean Seas, and the city thrived and became Egypt’s centre of commerce. This prompted the Roman emperors and governors to enlarge the garrison and dedicate resources to the city.

As the city grew, the fort became the home of the Roman Governor and the bastion of the Roman legions that secured the region. Commercial, economic and political interest drifted away from the older city of Memphis, which before the Roman invasion was the Egyptian capital, towards the new city of Babylon.

Babylon’s strategic and administrative significance in controlling the Egyptian province prompted the Arab Muslim leader ‘Amr Ibn-El ‘Aas to mark it as his key target and the first objective in his campaign to conquer Egypt in 641 A.D.

The Arab army attacked the city and besieged the fort for seven months, until on 9 April the fort surrendered and Fort Babylon fell into the hands of ‘Amr Ibn-El-‘Aas and his army, as did Memphis. The importance of the city of Babylon declined shortly after the Muslims’ domination of Egypt; all significant commercial and political interests moved to the new capital Fustat, built close by on the same bank of the Nile.

Today only parts of the inner towers remain of the fort and do not reflect the mighty shape the fort once had; the ground floor was six metres below where the churches are now. In the past many Christian religious buildings and the Coptic museum were built on what was once part of the fort. The hanging church (Al-Mu’llaqa) is adjacent to the south towers of the fort, and the St. George Church sits next to the northern tower.

The fort occupied an area of half a kilometre square; it was approximately 15 metres high and its walls were four metres thick. It was built from limestone and red rock taken from ancient Pharaonic temples in Memphis, which were also used for many other historic buildings, including the ‘Amr Ibn El-‘As Mosque and Cairo’s Ayyubid boundary wall.

The whole historic area is being renovated to preserve it for future generations with the help of several international organisations. Fort Babylon represents an important phase in Egyptian history and its once glorious city is considered part of the three historic cities from which contemporary Cairo originated: Memphis, On and Babylon.