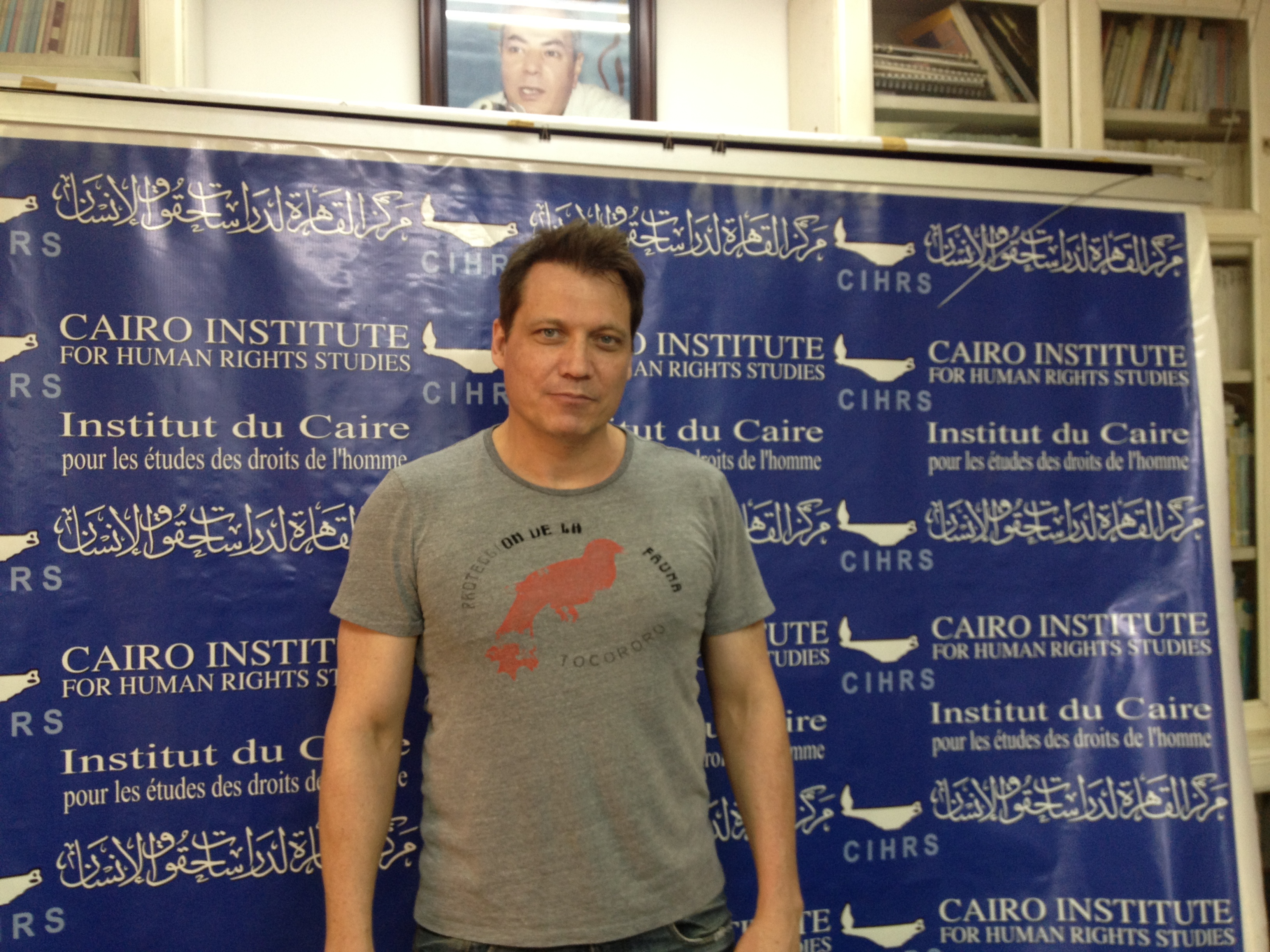 On Monday, American actor Holt McCallany came to Cairo. We met with him to see why he is visiting. “I have always wanted to come to Cairo for many years. I was doing a film with Sean Penn [Gangster Squad] and he told me about his friend Khalad Al Nabawy… Then, right after that, Ahmed Maher from the 6 April Youth Movement came to the set… He told me ‘if you are ever in Cairo, I would love to show you the situation on the ground’. It just so happened that I had been invited to Istanbul… So, through a mutual friend I was put in touch with Robert Becker, and he has been so generous. ” Becker used to work with the American-based National Democratic Institute, but was fired a few days after his appearance in court. He is currently in Egypt facing charges of money laundering and running an illegal organization. The institute was one of the 17 pro-democracy organizations raided by Egyptian security forces in December 2011.

He commented on the perception of Egypt in the US, “There is a lot of ignorance and a lot of misconception in the United States about what’s happening in Egypt. As a matter of fact, almost all of my friends, when I told them I was coming to Cairo, said ‘are you crazy? You’re going to die’. So, they really don’t understand,” said McCallany.

During his visit, he went to Gaber “Jika” Salah’s home. “We met Jika’s mother and father and he took me to Jika’s room, and it felt like a shrine with photographs of him, and all kinds of plaques and gifts; things to remember him. I talked to his father for quite a while and he said, ‘I lost my son and I miss him, but my son is a hero of the revolution and he’s a symbol of the struggle of the Egyptian people.’ So, even though there was tremendous sadness, I could see how proud he was.”

“We also met with parents of a young man, Mohamed Morsi, a 17-year-old sentenced to 15 years in prison for violating his curfew and arguing with the police,” he explained. McCallany’s most recent work is actually related to this kind of issue: “I am directing a film whose subject is wrongfully convicted. There was a recent study at North Western University that shows that since 1990, innocent people have spent over 10,000 years behind bars collectively.”

The American actor also shared his passion for politics. “I am on the campaign staff of a candidate for the district attorney of Brooklyn, New York. We are trying to defeat a corrupt incumbent who’s been in the position for 24 years. I’ve always been intrigued with politics… Last year, I visited Israel. I told my host that it’s very important I visit Gaza, but they told me it’s not possible… for security concerns… I was disappointed. I really wanted to see the reality, and not just stay in a nice hotel in Tel Aviv.”

McCallany also did not hold back on speaking truthfully about the US position towards Egypt during the 2011 Revolution: “We were very embarrassed in the United States because of the length of time the government took to recognise that the Mubarak era is over. We have a tendency to go to places like Iraq in 2003 under false pretences and use phony justifications. There is an inherent conflict for us in the United States that we want to be perceived as promoting democracy and we also want people in power that will protect our strategic interests.”

He seemed interested in the prospect of making a movie about Egypt, especially a documentary, but he expressed his worries about making a movie from the right perspective and showing the right story.  “The devil is in the details,” he laughed. He also hinted at a Los Angeles agent who might be preparing a movie about Robert Becker. “You never know, I might be playing Robert in a movie. I will just have to take up smoking.”

“I’ve been astonished by the hospitality and warmth of Egyptian people. It’s my first trip, but it won’t be my last… I want to make people aware [of the situation] and try to be an ambassador to Egypt… Come to Egypt. You’ll love the people, and the country. Don’t hesitate, come to Egypt,” McCallany concluded.