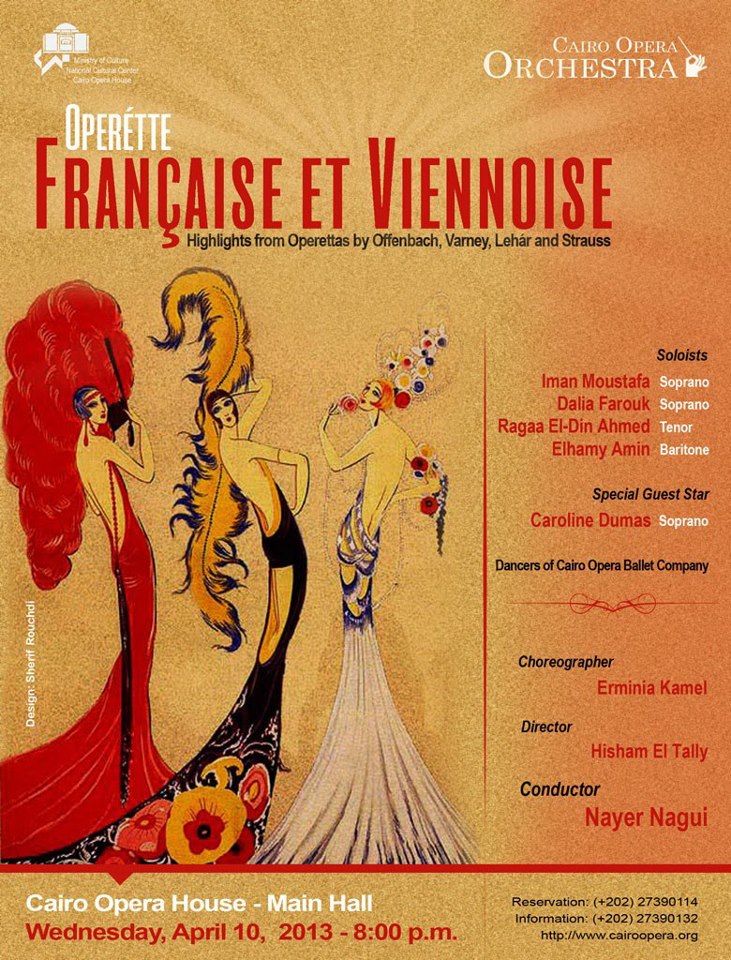 The concert’s conductor is Nayer Nagui who is also the founder and leader of the Cairo Choir. Nagui began as a pianist and has a collection of compositions for both the choir and orchestra. He became a conductor in 2003 and has led the performances of three operas for renowned Italian composer Giaochino Rossini. Nagui is also the technical manager of the Cairo Opera Orchestra.

Erminia Kamel, who was born in Italy and graduated from La Scala Theatre School, choreographs the dances. She married Abdel Moneim Kamel and moved to Egypt in 1982, where she became famous as one of the country’s premiere ballerinas.

The performance is directed by Hisham El Tally. Born in Ismailia he studied at the Concervatoire Music Institute in Cairo, with a specialisation in operatic singing. He started out as a singer at the Cairo Opera House in 1991. He then went to Austria where he obtained a diploma from the Mozarteum University. He completed his postgraduate studies at the High Institute for Theatrical Arts in Cairo.

The sopranos performing at the concert are Iman Mostafa and Dalia Farouk, and they will be joined by tenor Ragaa El-Din Ahmed and baritone Elhamy Amin. The performance will include a special guest, French soprano Caroline Dumas, who was born in Casablanca.

The gala will feature the work of Austrian composer Johan Strauss, such as the Gypsy Baron March and Die Fledermaus. It will also include the work of Austro-Hungarian Franz Lehar, The Merry Widow and The Land of Smiles, and that of Austrian composer Franz von Suppé, Morning, Noon and Night in Vienna Overture.  After the intermission the audience will enjoy a collection of other works from French composer Jacques Offenbach, the Orphee aux Enferts Ouverture and La Belle Helene, Louis Varney’s Les Mouquetaires au Couvent, André Messager’s Veronique and Lousi Ganne’s Les Saltimbanques.

The concert will start at 8 pm and tickets can be obtained from the ticket office.