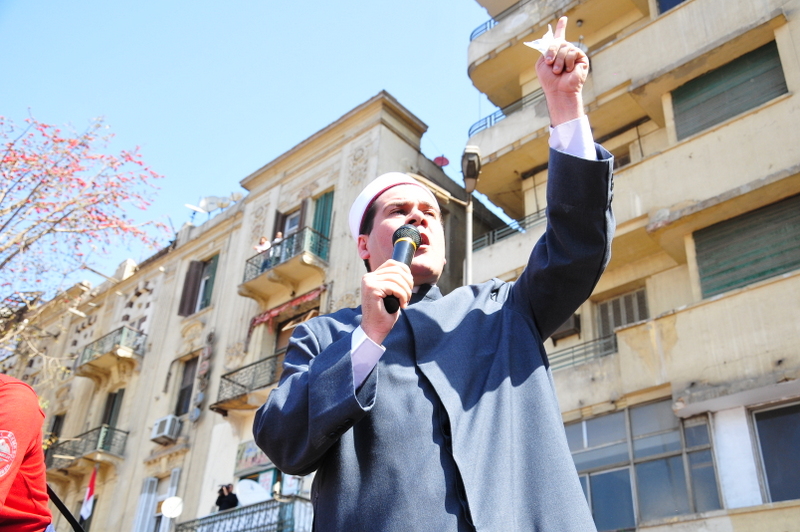 Minister of Endowments Tala’at Afify decided on Tuesday to suspend Mazhar Shahin the Imam and preacher of Omar Makram mosque in Tahrir Square from work.

Shahin, commonly known as the “preacher of the revolution”, was suspended for his political Friday prayer sermons that “divide Egyptians”.

“For the past two weeks the ministry has received complaints against Shahin for his political themed sermons and we have them recorded on CDs”, Afify stated in a telephone interview on Al-Mehwar channel.

He added that political speech should be avoided in mosques. “People need sermons to unite them not divide them.”

Shahin said his suspension was to transform the mosque to one that advocates the Muslim Brotherhood and take it away from the revolutionairies.

“Congratulations on having the Mosque,” Shahin said addressing the Muslim Brotherhood.

“The complaint, filed by a Brotherhood member, said that my sermon caused division among the worshipers when all the evidence he provided showed that I was calling for unity,” he said.

He added that the complaint mentioned his statements against destroying Egyptian monuments and selling the Pyramids. It also said that in the sermon Shahin provided examples from the prophet’s life and projected them on reality; they included the prophet listening to the opinions of his companions regarding the Battle of Uhud.

“If I asked President [Mohamed] Morsi to listen to the people and consult them, does that lead to division?” Shahin asked.

Afify denied Shahin’s allegations describing them as blatant lies. “I don’t take instructions from the Guidance Bureau of the Brotherhood,” Afify responded. “I didn’t appoint a preacher from the Brotherhood instead of Shahin and I certainly don’t want to increase the Brotherhood influence over the ministry.”

Afify added that there was nothing personal against Shahin, claiming the ministry would have taken the same decision against any other preacher who injects politics in his sermons.