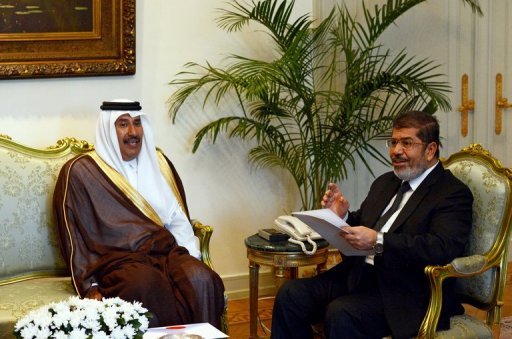 Qatar will provide Egypt with natural gas and an additional $3bn in the form of either Egyptian treasury bonds or deposits in the country’s central bank, according to Prime Minister Hesham Qandil at a press conference on Wednesday.

Prime Minister Hesham Qandil arrived in the Qatari capital of Doha on Tuesday evening for a brief visit to discuss a number of investment projects and trade agreements between the two countries as well as ways to attract further Gulf investments to Egypt, according to an official statement by Qandil.

The prime minister was accompanied by Minister of Investment Ossama Saleh who announced that they are working to establish eight large investment projects in the fields of agriculture, industry, tourism, energy, and water. Qandil will be promoting these during his visit to Qatar, according to state-run news agency MENA.

Mahram Helal, president of the Egypt Qatar Business Council (EQBC), said that the visit comes after a previous visit made by council representatives on Tuesday that discussed difficulties in importing Qatari gas faced by companies operating in Egypt’s private sector.

These investment projects include expanding the industrialisation of the Ein Sokhna and Port Said ports, developing over 300,000 acres of land for agriculture, expanding the tourist industry along the Red Sea and North Coast, and constructing new oil refineries as well as upgrading the infrastructure of existing ones, Saleh said.

“We reached an agreement to add more bonds from the Qatari government in the amount of $3bn. During the coming days, we will discuss the details of issuing those bonds,” Sheikh Hamad said.

He added on Tuesday that “officials from both governments would discuss the appropriate price of Qatari gas set to be imported by an affiliate of Citadel Capital”.

The gulf state has already granted Egypt $5bn, including a $1bn grant and $4bn worth of deposits at the Central Bank of Egypt since President Mohamed Morsi was elected last June.

Roughly 56% of local natural gas consumption in Egypt goes to the electricity sector, which increases significantly in the summer season as gas is diverted from other sectors to meet rising demand for electricity.

The Egyptian government has already announced power cuts and energy-saving measures, such as closing one of Cairo airport’s runways for four hours in the summer.

Qatar’s aid to Egypt has been a matter of protest in recent demonstrations where protesters have adamantly declared that Egypt has no need for assistance from Qatar or a loan from the International Monetary Fund (IMF).

On Sunday the EQBC expressed its anger over the latest episode of Bassem Youssef’s Al Bernameg programme, during which the satirist poked fun at Egypt’s relationship with Qatar.