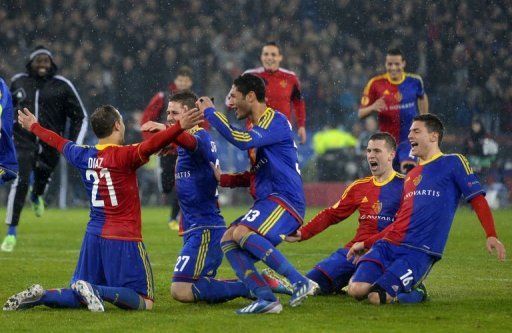 Two Egyptian players were in action in the Europa League on Thursday night against English Premier League opponents Tottenham Hotspurs.

Mohamed Salah and Mohamed Elneny both lined up for Swiss side FC Basel in the second leg of the UEFA Europa League tie against North London side Tottenham.

Basel fought hard to reach the semi-finals of the European club competition after Tottenham came from behind to take the game to extra-time. The stalemate continued throughout extra-time, but the Swiss side won the penalty shoot-out by four goals to one.

Salah and Elneny, both 20 years-old, played exceptionally well. Salah netted Basel’s equaliser just before the half-hour mark. He caused Tottenham left-back Kyle Naughton problems by using his pace and dribbling ability to create a number of chances for his team. Naughton was penalised with a yellow card for obstructing Salah just before half time as the Egyptian got the better of him once again. Salah was also able to switch between the two flanks easily and replicate his performance.

Elneny showed his worth on the European stage testing Tottenham goalkeeper Brad Friedel from range forcing the American to make an important stop. On one occasion he struck Friedel’s goalpost with a sublime effort from a long-way out.

Basel will now face Chelsea in the semi-finals of the Europa League, with the first leg due to be played on 25 April and the return leg on 2 May.