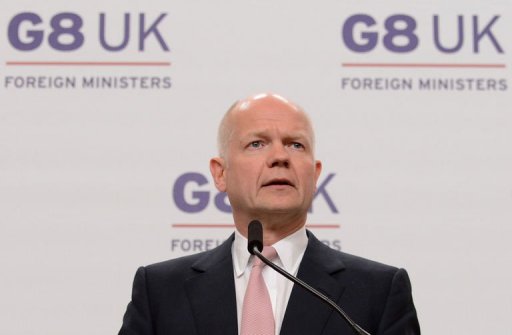 By Alice Ritchie (AFP) – LONDON — G8 foreign ministers strongly condemned North Korea over its nuclear programme on Thursday but failed to bridge divisions over Syria beyond calling for more humanitarian aid for victims of the conflict.

After a two-day meeting in London, ministers including US Secretary of State John Kerry warned Pyongyang it faced further sanctions in the event of an expected missile launch, amid soaring tensions on the Korean peninsula.

In a final statement, the ministers “condemned in the strongest possible terms the continued development of its nuclear weapons and ballistic missile programmes” including uranium enrichment.

He said this would likely include new sanctions, although these would have to be agreed at the UN Security Council and involve key North Korean ally and permanent Council member China.

The communique said North Korea was in direct violation of four UN Security Council resolutions and that its nuclear test on February 12 — its third since 2006 — and two missile launches last year “threaten international peace and security”.

Hague hailed the statement as a “firm and united and calm” response to North Korea’s increasingly aggressive rhetoric, noting Russia and Western nations were agreed on how to react.

But he admitted there was no such unity on the conflict on Syria, which is now in its third year and has cost 70,000 lives, according to the United Nations.

“The world has failed so far on its responsibility and continues to do so,” Hague said when asked about Syria, adding that it was “on track to be the biggest humanitarian catastrophe of the 21st century so far”

“We haven’t made a breakthrough on that but it’s vital to continue the discussions,” Hague admitted.

Russia’s continuing support of President Bashar al-Assad meant there was little direct condemnation of the Syrian regime in the final G8 communique.

Instead, it said ministers “were appalled that more than 70,000 people have been killed in the conflict” and that there were more than a million Syrian refugees abroad and two million internally displaced people.

They made no mention of supplying arms to the rebels as the Syrian opposition have demanded, an appeal repeated by opposition leaders in meetings with Kerry and Hague in London on Wednesday.

The statement said there should be greater “humanitarian” assistance for those caught up in a conflict, urging all countries to maximise contributions to the latest UN appeals on Syria.

The US and EU are currently providing non-lethal aid such as communications equipment, and are beginning to distribute food and medical supplies to the Free Syrian Army, but have stopped short of providing weaponry.

Hague said there was still a strong case for the EU to either let an arms embargo on Syria lapse when it expires in June, or to change the terms to allow the provision of weapons to the rebels, but there is little appetite for such a move with other European states.

There are concerns of where such weapons may end up, fears exacerbated by the declaration this week by one of the top rebel fighting forces in Syria, the Al-Nusra Front, of allegiance to Al-Qaeda chief Ayman al-Zawahiri.

Hague had a personal success, however, with a G8 promise of new measures and $35.5 million (27 million euros) in fresh funding to tackle the use of rape and sexual violence as weapons of war.

Hollywood actress Angelina Jolie, a UN special envoy on the issue, was present for the agreement on Thursday and hailed the final declaration, although she said it was “long overdue”.

For too long, rape victims “have been the forgotten victims of war”, said Jolie, who visited the Democratic Republic of Congo last month with Hague to highlight the issue.

“But today, I believe, their voices have been heard, and that we finally have some hope to offer them.

“Rape is not a women’s issue, or a humanitarian issue, it is a global issue and it belongs here at the top table of international decision-making where he has put it,” she added.

The declaration committed the G8 to work towards a new protocol setting out how to investigate such crimes, provide new training for their militaries on how to deal with sexual violence and provide support for prosecutions in countries worst affected.

Elsewhere, the G8 ministers expressed their “deep concern” about Iran’s continued nuclear activities after negotiations between Tehran and world powers ended in deadlock at the weekend