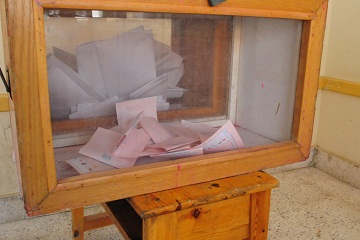 The elections for the Egypt Student Union were postponed until the State Council’s legislative committee issues a decision regarding the appropriate mechanism to be used in the elections.

The elections were due to take place last Tuesday, but were postponed amid disagreement between Muslim Brotherhood and non-Islamist students over the mechanism to be used.

Non-Islamist students wanted to use the 50% plus one mechanism, where only those who reap more than half of the votes win the elections. The Muslim Brotherhood students were intent on voting on the elections by a simple majority.

“The recently-enacted governing bylaws did not specify a certain mechanism for voting on the Egypt Student Union,” said Mustafa Saad, vice-head of the Cairo University student union.

Sohaib Abdel Maqsood, spokesperson for Muslim Brotherhood students, confirmed Saad’s words. “That, however, means that according to the bylaws, the simple majority vote mechanism is automatically adopted,” Abdel Maqsood said. He stated that as long as the 50% plus one mechanism wasn’t specified as the proper mechanism in the bylaws, it cannot be used.

“We don’t want a simple majority vote because this might lead to a student union where the number of opposition exceeds the number of winning candidates,” Saad said.

Amid controversy over the proper mechanism, Saad said the legal advisor in the committee tasked with supervising the elections advised the students to use the 50% plus one mechanism. “This means it’s the legally correct mechanism,” Saad concluded.  He said the Brotherhood students rejected the advisor’s decision, which led to holding a vote on the proper electoral system.

The mechanism was voted on three times. Saad stated that during the three votes, the majority of the students picked the 50% plus one mechanism; however Abdel Maqsood said that the first vote came in favour of the simple majority method.

“Around six students announced withdrawal from the elections as a result,” Abdel Maqsood said. “To avoid angering them, the committee announced it would use the 50% plus one mechanism. We refused such a decision and protested outside. During that time, the two other votes were taken; that’s why it was believed we lost the vote.”

In the end, it was agreed that the issue would be referred to the State Council’s legislative committee to decide on the proper mechanism to be used. The students also agreed to allow media coverage of the elections.

Saad stated that the elections are expected to take place early next week.

“We agree with any mechanism that would ensure swift and fair elections,” Abdel Maqsood said.

The two-year-old Egypt Student Union was formed after the 25 January Revolution to unite student unions from universities across Egypt. The union was dominated by a Brotherhood majority last year. Non-Islamist students accused them of independently drafting the current bylaws without referring to the students.

The latest student union elections at various universities around Egypt saw a noticeable decline in the Muslim Brotherhood’s popularity when compared to last year.